Nevada’s Sam Stein kept his concentration to secure the World Series of Poker (WSOP)’s 2011 $3,000 pot-limit Omaha gold bracelet and $420,802 as the third day’s play finished at 5am in Las Vegas. 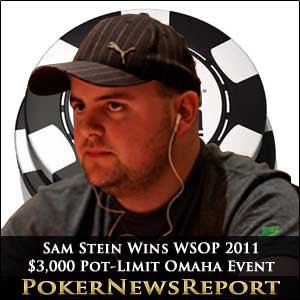 Nevada’s Sam Stein kept his concentration to secure the World Series of Poker (WSOP)’s 2011 $3,000 pot-limit Omaha gold bracelet and $420,802 as the third day’s play finished at 5am in Las Vegas.

It seemed certain that the players – from an original field of 685 – would have to return for a fourth day, but then a quick succession of exits left us with Stein victorious after he defeated day one chip leader Ben Lamb as the sun rose above the Rio All-Suites Hotel & Casino.

However, player exits came thick and fast on day three as players such as Tex Barch (10th), Andrew Chen (13th), Rami Boukai (17th) and Tommy Le (20th) fell before the final table was formed, with Lamb heading the chip count on almost one-third of those in play.

It took almost 90 minutes before our first player left the final table, but – once Dilyan Kovachev hit the rail – Austin Scott followed soon after in eighth, before Brock Parker’s race for a third WSOP bracelet ended in seventh place.

Zimnan Ziyard, who was short-stacked, finishing in sixth, before the chips moved around for several hours.

But then Adam Junglen couldn’t capitalise on his second WSOP final table this year as he was eliminated in fifth place. Christian Harder was next out as Warren Fund crashed in third for $184,368.

That left Lamb and Stein heads-up with only 30 minutes left on the clock for the day. However, with Stein holding a better than 2-1 chip lead over Lamb, it took just a few dozen hands before the former’s turned Broadway straight held against Lamb’s second-nut straight and re-draw to a chop.

Lamb fired once again – for 255,000 this time – and, after nearly two minutes of thought, Stein announced a pot-raise. An apparently stunned Lamb also paused for a short time, before pushing the remainder of his chips into the pot.

Stein called to show Ac-Qh-Jh-6h, while Lamb held Qc-Js-9d-4h. Lamb needed an ace for a chop, and Stein instantly turned to his supporters to say: “No ace and I win!”