Sam Grafton overturned a 3-1 chip deficit in the heads-up of the GUKPT Grand Final to defeat Peter Charalambous at London´s Grosvenor Victoria Casino. 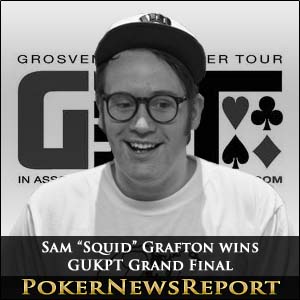 Sam Grafton overturned a 3-1 chip deficit in the heads-up of the GUKPT Grand Final to defeat Peter Charalambous at London´s Grosvenor Victoria Casino.

The Grosvenor UK Poker Tour (GUKPT) reached a fantastic conclusion this weekend with the Grand Final Main Event. 137 players qualified for the climax of the year-long series or paid the £2,500 buy-in – creating a prize pool of £342,500 which was distributed among the top thirteen finishers. Attracting such leading UK poker players as Jake Cody, Jamie Burland and Neil Channing, the tournament was expected to be fiercely competitive – and so it proved.

The final table was set after the late-night elimination of Jan Sjavik on Saturday and led by Matt Moss – who had been chip leader at the end of Day 1 and throughout most of Day 2. Blinds when the cards first went in the air were 6,000/12,000 with an ante of 1,500 chips.

Cooler for Spinks as Brammer Crashes Out

There was no hanging about in the early hands. A first hand shove by chip leader Matt Moss relieved Peter Charalambous of 25,000 chips and then Sam Grafton crippled Jon Spinks in an AA > KK exchange. Chris Brammer – who arrived 20 minutes late – was eliminated in the first hand he competed in when he called Matt Moss´ 10-9 shove with A-J, only for Moss to turn a straight and eliminate Brammer in ninth.

Peter Charalambous recovered quickly from his first hand loss when doubling up against Sam Grafton (AQ > 88) and then eliminating Sandeep Khosa in eighth (KQ > JJ). Jon Spinks also added some chips to his depleted stack – coming from behind with Q-2 to cripple Dave Maudlin (A-Q) and then capturing the last of Maudlin´s chips in a Q7 > 97 flip. Maudlin exited in seventh.

Hassabis and Spinks sent to the Rail

George Hassabis received a seat in next year´s GUKPT Grand Final for being the longest surviving qualifier, but his luck was about to fail him. Having shoved on several occasions without reply, he eventually got all his chips into the middle post-flop (9♥ A♦ 3♥) with 7♥ 5♥ for the flush draw. He was called by Peter Charalambous (A♦ 10♠) whose top pair held up to bust Hassabis in sixth.

After four quick eliminations within the first two levels, play started to settle down a little. Victor Ilyuhkin managed an important double up against Sam Grafton, who then came back to haunt Jon Spinks – reducing Spinks to less than 200,000 chips once again in a A♠ Q♣ > A♣ 9♣ race. Spinks got the last of his chips into the pot with KJ and was looking good to double up against Matt Moss (A8) after the flop of K-8-J gave him two pairs. Incredibly an 8 came out on the turn to give Moss trip Eights and Spinks was out in fifth.

Moss Crushed by Aces – and then sees his Aces Cracked!

As play went four-handed, Victor Ilyuhkin temporarily took the chip lead when his pocket Aces flopped top set to double up against Matt Moss. Matt Moss probably could not believe his luck to be dealt AA soon after and got called by Sam Grafton (QQ). Moss avoided any obstacles on the flop of 7-7-2 and the turn card, but a Queen on the river gave Grafton a set and eliminated Matt Moss in fourth.

The remaining three players were each left with just over a million chips each after Peter Charalambous hit a three-outer to double up against Sam Grafton (K5 > KJ) and then Charalambous took the chip lead after capturing a massive pot, again from Grafton and again as the underdog, with KQ > A10. Charalambous extended his chip lead with the elimination of Victor Ilyuhkin in third (A8 > Q9) and going in the heads-up held a 1.8 million chip advantage over Grafton.

The Squid Fights Back and Takes Victory

It only took two hands of the heads-up for Sam Grafton to almost level up the chip counts. Moving all-in in response to a pre-flop raise from Peter Charalambous, Sam Grafton turned over AQ to dominate Charalambous´ A6 and double up. Sam Grafton then took the chip lead when his paired King overcame Charalambous´ missed flush draw, and it was all over a couple of hands later – although with Grafton getting more than a little luck.

The flop of K♠ J♦ 3♠ gave Grafton the opportunity for a flush draw, and the Q♥ offered the chance of both players making a straight. However Peter Charalambous was still ahead prior to the river and looking likely to double up before the Q♠ completed Sam Grafton´s flush and gave him the title of GUKPT Grand Final Champion.

The GUKPT Grand Final concludes the season for 2012 – a season which saw thirteen magnificent events throughout the country and in Belgium (Leg 6 in June). The dates for next year´s tour have just been announced and will guarantee more than £1,750,000 in prize money for 2013.