Englishman Sam Razavi became only the second European player to win an APPT Main Event, taking down the APPT Melbourne with an impressive poker masterclass. 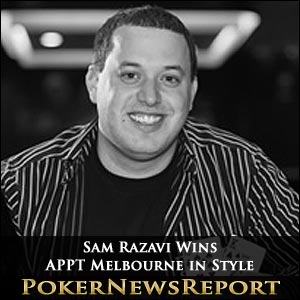 Englishman Sam Razavi became only the second European player to win an APPT Main Event, taking down the APPT Melbourne with an impressive poker masterclass

As the PokerStars Asia Pacific Poker Tour Melbourne Main Event prepared for its climax, few eyes were on Sam Razavi. Most of the media attention was focused on chip leader Tom Grigg, who had recovered from being short stacked on the penultimate day, to lead the tournament and make a record-breaking fourth appearance at an APPT Main Event Final Table.

Indeed, as the final nine players assembled at the Crown Casino in Melbourne, Grigg held a sizeable advantage over all of his opponents and also three times the average number of chips.

One of Grigg´s main opponents was the first to fall. Brendon Rubie first got caught bluffing against Wayne Bentley to double up the Englishman, found Kristian Lunardi´s Q♣ Q♠ too strong for his own K♣ 9♣ and then was eliminated by Sam Razavi´s J♣ J♠.

Rubie´s departure sparked a series of quick exits. Nigel Andrews was next to follow him to the cashier´s desk when he shoved his 7♣ 7♦ into the K♦ K♣ of Kristian Lunardi. Lunardi then got busted by pocket Sevens when his A♥ Q♥ failed to connect against Wayne Bentley´s “hockey sticks”, and Bentley briefly took the lead in the tournament when his K♠ Q♥ caught trip Kings on the flop to master the A♣ J♣ of James Bills.

First Bentley passed 600,000 chips to Tom Grigg when his 8♥ 6♠ failed to make its draw and came second to Grigg´s second pair, then another quarter million chips went in the direction of Keith Walker – whose A♠ 9♦ on a flop of 9♣ 8♠ 7♠ held on against Bentley´s J♠ 8♦ – and finally Sam Razavi got in on the act – Razavi´s K♦ Q♠ out-kicking Bentley´s K♠ 4♠ for another quarter million chips.

Despite doubling up against Tom Grigg, and managing to hang around for an hour or so longer, the damage to Wayne Bentley´s hopes had been done and his demise was complete when his Q♣ 7♣ came second to Tom Grigg´s turned pair of Eights.

Grigg on the Climb and Back Down Again

As the game became three-handed, Tom Grigg turned on the aggression. After Wayne Bentley´s departure, Grigg, Razavi and Walker were evenly stacked but – without a hand going to showdown – Grigg built up a substantial lead and, at the beginning of Level 27 (blinds 25K/50K – ante 5,000), had more than five million chips in front him – with Sam Razavi (1,500,000 chips) and Keith Walker (1,200,000 chips) seemingly left behind in a cloud of chip dust. However, Sam Razavi was able to quickly double up when his 9♠ 9♣ held against Grigg´s A♣ K♦ and, after Keith Walker had forced a fold in a valuable pot out of Grigg, Razavi got his man.

Tom Grigg raised to 100,000 from the small blind and was called by Razavi. Following the flop of 7♣ 7♥ 5♠, Grigg bet a further 105,000 which was called by Razavi. Grigg´s aggression continued after the turned Q♥, but he checked after the river card 3♦. Razavi shoved all-in and, after a substantial delay Grigg put the remainder of his chips in the middle of the table. Razavi turned over 5♥ 5♦ for a flopped full house while Grigg mucked his cards and left his seat in third position.

Holding a 3:1 chip advantage going into the heads-up, Sam Razavi did not take long to wrap up victory; however it was Keith Walker who was the aggressor in the final hand – moving all-in from the big blind with J♦ J♣. Razavi called with K♠ 10♠ and the flop of A♠ 2♦ 5♠ gave him hope of a flush draw in addition to his overcard. The 8♠ on the turn sealed victory for the Englishman while Walker had to see the J♠ on the river give him three-of-a-kind.

Sam Razavi collected AU$326,125 for his victory – a victory which elevated Razavi into the top 100 all-time UK and Ireland money winners. Following Marcel Schreiner´s victory in last year´s APPT Snowfest it seems that the PokerStars Asia Pacific Poker Tour is becoming a happy hunting ground for poker players from Europe. Players from 15 different European countries have now cashed in an APPT event, with Wayne Bentley and Sam Razavi respectively being the eighteenth and nineteenth players from the UK to fly home with more money than they left with!