Sam Keyrouze won the Borgata Poker Open Seniors Event #5 after a crazy conclusion to the tournament saw the final positions determined in one six-handed pot. 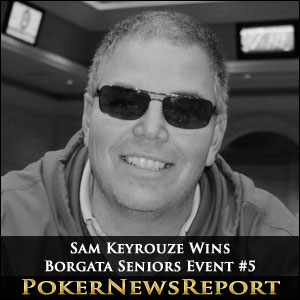 Sam Keyrouze won the Borgata Poker Open Seniors Event #5 after a crazy conclusion to the tournament saw the final positions determined in one six-handed pot.

The Borgata Fall Poker Open Seniors Event was tinged with sadness after the passing of Mike “Little Man” Sica just a few days before – a regular at the Borgata for almost a decade, who had amassed 33 cashes in Borgata Poker Open events and thousands of friends among the East Coast poker community.

With blinds of 10,000/20,000 (ante 3,000), Ray Snoots was looking for a quick double up, and believed he had found it when his Q♠ J♠ paired on the flop when all-in against Sam Keyrouze (K♦ 9♠). Unfortunately for Snoots, the K♣ was dealt on the River and he was the first player to leave the final table of the Borgata Seniors Event in tenth place.

Keyrouze was also responsible for the elimination of Don Brown in ninth place, when Brown moved all-in with A♠ J♠ and Keyrouze made the call with A♥ Q♥ – the flop of 9♥ 8♥ 3♥ giving Brown no way back into the hand – and Mitchell Friedman was to be the next of Sam Keyrouze´s victims – moving all-in with K♥ 9♥ and seeing Keyrouze flop a set of Eights.

The pack condensed together when Chuck Newmark doubled up against Keyrouze A♦ 4♦ > Q♥ Q♦ and, after Jose Gonzalez had bust Gerard Ciofalo in seventh A♦ 10♥ > 8♠ 7♠, only a handful of blinds separated the remaining six players. With the time getting past 1.00am, and the final table likely to last for several more hours, the decision was made to play out one hand to determine the final places, as many of the players in the event wished to attend Mike Sica´s funeral the following morning.

Unfortunately, the Borgata Blogger missed each players´ cards in the flurry of action that followed (Mike Sica would have laughed at the chaos!), but did manage to record that Mike Keyrouze won the final hand with 9♠ 3♠ and make a note of the final positions and payouts: