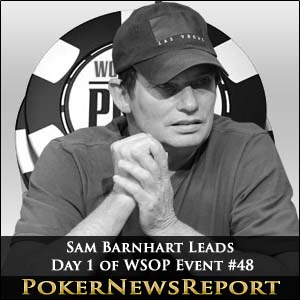 French-Canadian Jonathan Duhamel – the 2010 main event winner – also survived by accumulating a lot of chips near the day’s end to bag up on 25,700 for 29th place heading into Day 2.

The 24-year-old busted fellow Canuck Tyler Bonkowski – who was the defending champion – while also winning a few pots against yet another Canadian in his Team PokerStars Pro team-mate Daniel Negreanu. However, Toronto’s Negreanu also made it through Day 1, although he will start today on just 1,200 chips in 116th place.

Meanwhile, superstar Phil Ivey did register for the tournament, despite taking part in the $50,000 buy-in Poker Players Championship event #45. But, when he did take his seat in event #48 in level 7, he was eliminated pretty swiftly.

Today should see 10 levels played out in the Amazon Room, with the money bubble almost certain to burst when 27th place will pick up $5,799 from the $674,310 prize pool.