Jack Salter and Mayu Roca will have more than half the chips in play between them when the Final Table of the EPT Monaco Main Event resumes later today. 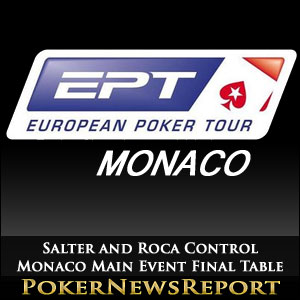 Jack Salter and Mayu Roca will have more than half the chips in play between them when the Final Table of the EPT Monaco Main Event resumes later today.

Day 5 of the EPT Monaco Main Event was a relatively short one – taking less than five hours to reduce the field from seventeen players to a final table of eight – but it was long enough for Jack Salter and Mayu Roca to build chip stacks which tower over those belonging to the rest of the field.

With only nine players needing to be eliminated before the final table for the EPT Monaco Main Event was set, it actually took fewer than three levels of play to determine who would be left with a chance of collecting the €1,240,000 first prize.

Steven Silverman was the first out of the door when his A♥ J♥ failed to improve against Mayu Roca´s Q♠ Q♦, and he was quickly followed by Matias Ruzzi (A♠ Q♦ < Antonio Buonanno´s K♣ K♥) and Nikita Nikolaev – with a pair of Queens again giving Roca a winning hand against Nikolaev´s 10♠ 10♣.

Mayu Roca´s fantastic start to the day only got better when he flopped a Queen high straight with Q♣ 10♣ to eliminate Nicholas Petrangelo in fourteenth place and, by the first break of the day, Mayu Roca had amassed a chip stack of 4,285,000 chips – more than double that of second-placed Kenny Hicks.

Players continued to be eliminated from the EPT Monaco Main Event at a fast pace – Ivan Soshnikov running his A♠ K♣ into Vasili Firsau´s A♦ A♣, and Mark Teltscher (A♠ 2♠) finishing twelfth after Sebastian von Toperczer defended his big blind with pocket Fours and hit a set on the flop – von Toperczer also being responsible for the elimination of Miroslav Alilovic 8♦ 5♥ > Q♥ Q♠ when he spiked two pairs on the River.

Thereafter, Day 5 of the EPT Monaco Main Event was all about Jack Salter. Salter cut down Roca´s lead when taking a valuable pot from the Columbian A♦ 6♦ > A♣ 5♣, took several big pots pre-flop from Vasili Firsau and Kenny Hicks with aggressive four-betting, and then eliminated Firsau J♠ J♣ > A♣ 10♠ to join Mayu Roca at the top of the chip counts.

Jack Salter moved into the chip lead in fortunate circumstances in the last hand of the day. Martins Seilis had three-bet all in for 710,000 chips from the cutoff, and Salter made the call from the Small Blind;

Seilis was a 2:1 favourite to double up, but his odds of success were sliced when the flop delivered 3♣ K♦ 4♣ – giving Salter a flush draw. The 4♥ on the Turn improved the chances of their being a chopped pot, but the K♣ on the River sealed the hand for Salter – confirming that, when the final table of the EPT Monaco Main Event gets underway at 1:00pm today, Jack Salter will have the chip lead.