Vietnam veteran Sal Popolo was a very happy man after taking down the two-day Borgata Fall Poker Open Event #6 for his biggest poker tournament cash of $44,495. 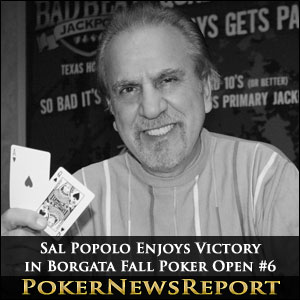 Vietnam veteran Sal Popolo was a very happy man after taking down the two-day Borgata Fall Poker Open Event #6 for his biggest poker tournament cash of $44,495.

Event #6 of the Borgata Fall Poker Open was a $200 + $30 buy-in two-day Deepstack tournament that carried a $100,000 guaranteed prize pool and attracted more than a thousand entries and re-entries over three starting flights.

When the 159 survivors of the sixteen levels on each of the three Day 1s reconvened at the Borgata Casino and Hotel in Atlantic City, only 100 were to cash in the event and, by the time the final table was set, only Jim Andrade and Margaret Martin remained from the players who had started the day with a top ten chip stack.

With blinds already at 50K/100K (ante 10K), several of the players were selecting their times carefully to get involved in pots, and Margaret Martin (King-Nine) was particularly unlucky to get all her chips in after her King had paired on the flop and run into Sal Popolo´s King-Ten – which had made two pairs on the flop. With no help from the Turn or River, Margaret Martin was eliminated from the final table in tenth, while Sal Popolo moved into second place in the chip counts.

Alex Rocha´s timing was equally as unfortunate – running his pocket Jacks into Alec Miller´s pocket Kings – and he was bust in ninth place; but the worst bad beat story among the early departures probably belonged to Rocco Luciano; who waited until he had pocket Kings to move in with the last of his chips, received a call from Ileana Ehrenberg (Ace-Five), and watched in horror as the chip leader flopped trip Aces.

Popolo Moves Up and Takes the Lead

A big hand between Reece Lightener (A♦ J♦) and Ileana Ehrenberg (J♠ 8♠) changed the dynamics of the tournament, after both players were chasing gutshot draws on the flop of Q♥ 10♠ 6♣. Lightener hit the K♦ on the River to double-up and share the chip lead with Ehrengerg, and the two players were joined by Sal Popolo after he knocked out Chris Tryba in seventh and then crippled Tom Tylek Ace-King > pocket Jacks.

Tylek was bust soon after when his Ten-Nine failed to improve past Alec Miller´s King-Eight, but Miller´s tournament life was soon to be extinguished when he moved all-in on the flop and Turn of Q-J-2 / 2 with Queen-Jack for two pairs, and was called by Sal Popolo, who had limped in with Four-Deuce and hit trip Deuces at the right time.

Popolo Takes Lightener in the Heads-Up

With the elimination of Alec Miller, Sal Popolo had moved into a clear chip lead with 8 million chips ahead of Ileana Ehrenberg (7 million chips); but he was soon to be joined at the top of the leaderboard by Reece Lightener, who eliminated the relatively anonymous Jim Andrade Ace-Queen > Ace-Seven as the blinds increased to 150K/300K with a 40K ante.

Popolo regained his lead with the elimination of Ileana Ehrenberg in third (Jack-Six > Ace-Seven) after Ehrengerg had moved all-in on the flop of Jack-Six-Four with air, and Popolo had flopped two pairs. Sal Popolo took a 14.5 million -v- 7.5 million chip advantage onto the heads-up, and Event #6 of the Borgata Fall Poker Open was resolved in the first showdown.

Reece Lightener (Ace-Six) moved all-in from the Small Blind and was called by Sal Popolo (Ace-Queen). Popolo looked good to score his first Borgata title, until the flop of Six-Four-Three paired Lightener´s hand. Lightener would have reversed the chip stacks if his pair of Sixes had held, but a Queen on the River won the hand for Sal Popolo, and he collected the winner´s trophy and $44,495 first prize.

Reece Lightener was pretty philosophical in defeat – stating that, as the event had a $100,000 guarantee, picking up $26,738 for second place felt like a win. The full list of payouts for those who made the final table in the Borgata Fall Poker Open Event #6 is as follows: