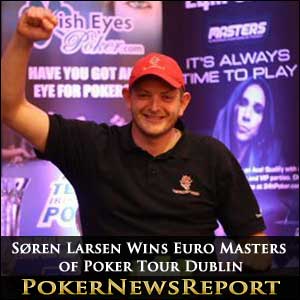 Søren Larsen saw off 302 other entrants – and in particular a strong home entry – at the fourth stop of season three of the tour to leave with the €71,210 first prize after defeating Irishman Dara O’Kearney (€42,720) in their heads-up clash.

The final table was undoubtedly an Ireland-Scandinavia battle, with four representatives from the former and five from the latter – and it eventually all came down to Larsen versus O’Kearney.

Incredibly, the final table only produced 137 hands – with just 12 of those seeing heads-up play.

With the heads-up battle starting, Larsen held a good chip lead over O’Kearney with 4.5 million compared to his experienced opponent’s 1.5 million – and the Dane never really looked in trouble as he remained aggressive throughout.

On the button, O’Kearney pushed all of his 1.2 million chips in on the final hand, and was called by Larsen. The Irishman held K♦ 8♥ and the Dane showed J♦ 9♦, but the latter received the dream flop of J♠ 9♣ 7♦ to give him two pair. The turn came 6♠ and the river showed 4♠ to change nothing and Larsen lifted the title.

The tour now moves on to Spain for its fifth stop, with the €1,000+€100 buy-in main event at the Gran Casino in Barcelona, which runs from September 29 to October 2.

The final positions and payouts from the Euro Masters of Poker Tour Dublin event: