Rybin Still in Command as WPT Cyprus Hits the Money 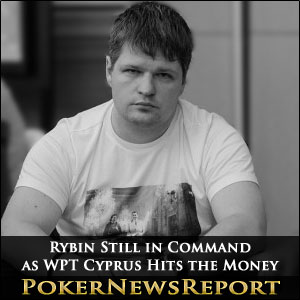 Just four levels of play were concluded yesterday at the Merit Crystal Cove Resort and Casino as twenty-seven of the returning field of thirty-one players safely negotiated the WPT Merit Cyprus Classic “bubble”, and then carried on playing until just fourteen remained.

At the head of the chip counts is Russian poker player Alexey Rybin, who continued the destructive work he started on Day 2, and who eliminated the player who was closest to him in chips when play started – Asaf Avci (A♥ A♦ > J♥ J♠) – among others.

Bubble No Fun for Fundaro

Not surprisingly the early exchanges at the tables involving the shortest stacks players were cautious and it was well into the second Level of the day (Level 17 – blinds 2,500/5,000 – ante 500) before the bubble burst.

When it did, it was current WPT Mazagan champion Giacomo Fundaro who was the unfortunate player – getting his last 70,000 chips in with A♣ A♦ against Baris Topkaya´s J♥ J♦ and seeing the J♠ spike on the river to eliminate him out of the money in twenty-eighth place.

Incredibly, Topkaya was dealt A♣ A♦ in the very next hand, and this time the pair held against Boris Yanpolskiy´s shove with 4♠ 4♦ – Yanpolskiy being the first in a growing line of players to quickly form at the Cashier´s Desk and, by the time Level 18 had drawn to a close, only sixteen players remained.

Is Rybin Starting to Leak?

It was during the last level of the day (Level 19 – blinds 4,000/8,000 – ante 1,000) that Alexey Rybin bust the dangerous Asaf Avci in fifteenth to chip up to over 2 million chips; but then something not seen before happened in the WPT Merit Cyprus Classic Main Event – he started to lose them.

Day 1B chip leader Bernard Samaha twice got three streets of value against the chip leader when winning pots with Kings > Sevens and Quad Fours > Rybin´s unseen hand, and Andrei Nikonov sprung a trap against Rybin which cost the chip leader more than 400,000 chips and elevated Nikonov up to fourth in the chip counts.

One other player to make a significant impact during the last few hands of the day was Maximilian Droege – the less-than-subdued Canadian rising from 283,000 chips at the start of the last level to 618,000 at the close of play, courtesy of a turned Flush > turned Straight against Sergey Rybachenko and then slow-rolled A♥ A♠ against the pocket Deuces of Oleg Suntsov.

Looking Ahead to Day 4 of the WPT Cyprus

The WPT Merit Cyprus Classic Main Event could in theory play down to a winner today – and give everyone a day off tomorrow – but it probably won´t. The likelihood is that play will continue at the Merit Crystal Cove Resort and Casino until a final table of six players is reached, and the tournament concluded on Wednesday.

When the fourteen remaining players take their seats today, they will be entering Level 20 (blinds 5,000/10,000 – ante 1,000) with the average chip count being 561,428. The next player out will receive $13,200 for their efforts over the past three days, but there are some steep jumps in the payout structure once the tournament goes nine-handed – with the big prize up top worth $250,000.