Rybin in Control as 6 Remain in WPT Cyprus Main Event

Alexey Rybin will aim for the extraordinary achievement of being chip leader from start to finish when the climax of the WPT Cyprus Classic is played today. 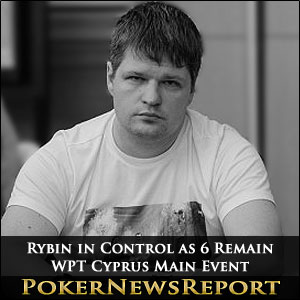 Alexey Rybin will aim for the extraordinary achievement of being chip leader from start to finish when the climax of the WPT Cyprus Classic is played today.

Very few players lead any tournament from start to finish – especially a high-profile tournament such as the WPT Cyprus Main Event – but that is what Russian poker player Alexey Rybin will be attempting when the six players remaining in the event take their seats at the Merit Crystal Cove Resort and Casino later today.

Rybin stormed into the chip lead on Day 1A of the tournament and has maintained a substantial advantage ever since. After yesterday´s action in the WPT Cyprus Main Event, Rybin holds his biggest lead yet – more than 1 million chips ahead of nearest pursuer Albert Daher – equivalent to 46 Big Blinds.

Rybin off to a Flyer on Day 4

Day 4 of the WPT Cyprus Main Event was notable for the number of double-ups that got through and the length of time it took to reduce the field of fourteen to a final table of six (eight hours – almost as long as was played on Days 2 and 3 combined!). However, it was Alexey Rubin who made the best possible start – eliminating Baris Topkaya in 14th when his K♦ 3♦ rivered a Flush against Topkaya´s K♣ 2♣.

After three quick eliminations in the first level of play, only one occurred in the next two hours – last female standing Natalya Nikitina (A♣ Q♥) failing to connect with the board against Albert Daher´s 10♥ 10♦ and busting out in eleventh. As the remaining ten players converged onto one table, the game evolved into who could double up the most.

Alexandr Lakhov (A♠ 8♠) caught an Ace on the flop to double up against Kfir Yamin (Q♥ Q♦), before Jerfi Firatli (K♠ 10♠) turned a straight to crack Andrei Nikonov´s pocket Aces, and then Nikonov was once more on the wrong end of a double up as Kfir Yamin hit a set of Fours on the flop to best Nikonov´s ambitious call with Q♣ J♦, but Yamin suffered a subsequent blow to his chip stack when doubling up Kayhan Tugrul 9♣ 9♠ > A♠ K♦.

After two hours of players surviving when they shoved, the eliminations resumed again. As Level 23 started (blinds 10,000/20,000 – ante 3,000), Jerfi Firatli (A♦ 7♣) shoved all-in from the small blind and was called by Albert Daher (A♥ 10♠). With no Sevens on the board, Firatli was sent to the rail in tenth, where he was soon followed by Alexandr Lakhov – whose K♥ 8♥ failed to improve past Kayhan Tugrul´s A♠ 7♦ – and Kfir Yamin (8♥ 8♣), who quickly knew his fate against Sergey Rybachenko (Q♦ Q♥) when the Q♠ was the first card dealt on the flop.

With one player to be eliminated before the final six-handed table was set, there were several lucky escapes for short-stack Kayhan Tugrul. First he looked to be on his way to the cashier´s desk when his pair of Jacks faced Alexey Rybin´s pocket Queens, but a wheel on the board enabled both players to chop, and then Tugrul held his breath while his 8♣ 8♦ held against Maximilian Droege´s A♦ 10♦. Now the short-stack himself, Droege got the last of his chips in with 2♥ 2♦ and was snap-called by Sergey Rybachenko who had been dealt 10♦ 10♠.

With no deuces among the community cards, Droege – who had travelled all the way from Canada after qualifying for the WPT Cyprus Main Event online – was eliminated from the tournament in seventh and the final table was set:-

When the six remaining players take their seats at the Merit Crystal Cove Resort and Casino later today, just a few minutes remain in Level 24 (blinds 12,000/24,000 – ante 4,000). Play will continue until a winner is found, and although most people´s favourite for victory will be Alexey Rybin, what a story there would be if Sergey Rybachenko could claim the title after being eliminated from the WPT Cyprus Main Event by Rybin in the final hand of Day 1A, and then re-entering the event on Day 1B.