2013 Main Event Champion, and self-proclaimed “best player” Ryan Riess, has sold a portion of his action for upcoming tournaments. 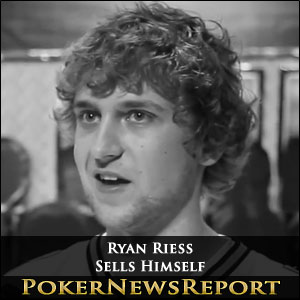 2013 Main Event Champion, and self-proclaimed “best player” Ryan Riess, has sold a portion of his action for upcoming tournaments.

Some Main Event Champions, like Pius Heinz and Greg Merson, prefer to avoid the limelight. Others, Greg Raymer and Joe Hachem among them, have become true ambassadors of the sport. It appears that newly crowned 2013 WSOP Main Event winner Ryan Riess, may very well fall into the latter category.

Over the course of the next several months, the first WSOP champ to brandish a Detroit Lions jersey is planning on playing a variety of PCA, Aussie Millions and WPT tournaments – eight in total. Among them will be at least two 100k super high-roller events, the $25k WPT Championship and several other high buy-in tournaments.

Last week, 23 year old Riess posted on Facebook that he would be selling the package at $3,250 per one-percent – a rate of approximately 1.1:1, to anyone that was interested. Given Riess’s newly inflated bankroll, it appears that the young pro is practicing solid bank management and frugality – good attributes to have if he hopes on sustaining a long term career as a poker pro. Or it could just be an elaborate publicity stunt – who knows?

Either way, expect to see Riess at most major stops on the 2013-2014 live tournament circuit. It is assumed that he’ll be playing in the PCA $100k Super High Roller the PCA Main Event, and the $25.5k High Roller. The PCA is scheduled to kick off on January 5th.

Riess will also play in four Aussie Millions events, including the AU$100,000 Challenge and the AU$10,000 Main Event. He’ll conclude his tour by participating in the waning WPT World Poker Tour Championship in May. The WPT reduced the buy-in for the tournament to $15,000, and for the first time ever it will take place somewhere other than the Bellagio. Instead, the Borgata in Atlantic City will host the event – which makes sense given its affiliation with WPT owner, bwin.party. Expect to see a sharp rise in attendance this year, as the Borgata is notorious for drawing massive tournament fields.

Today, it was revealed that Riess’ package is sold out. The total percentage Riess sold of himself is currently unknown. Several poker pros and forum users spoke out against Riess’s markup, with Shaun Deeb stating the following on Twitter:

I feel embarrassed for the poker community that people are buying packages for over 1.1 MU.

Yet despite the ill-will, there is a large contingent of players who feel Riess can offer whatever deal he deems fair, as he’s not forcing anyone to back him.

In Riess’ defense, players have to make their money somewhere, as sponsorships have become exceedingly sparse. Remember the days when PokerStars would reward someone wearing their patch an extra million dollars for winning the Main Event, not to mention the countless promotional opportunities associated with become a Team PokerStars Pro? Those days are long gone.

At the very least, the eight tournament sample size should be enough to determine if Riess truly is a beast, or if his win was a mere anomaly. We already know what Ryan thinks, how about you?