Local poker player Ryan Price took the chip lead in the World Poker Tour SA Main Event after being responsible for the fastest ever bubble in WPT history. 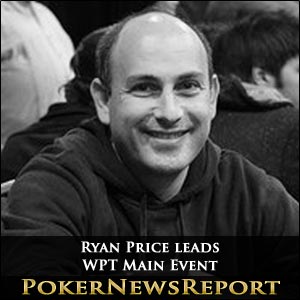 Local poker player Ryan Price took the chip lead in the World Poker Tour SA Main Event after being responsible for the fastest ever bubble in WPT history.

Just 27 players remain in the inaugural South African World Poker Tour Main Event in Johannesburg after Ryan Price eliminated Jacques Londt before tournament director Matt Savage had the opportunity to bring in hand-for-hand play. Londt, who had seen his chip stack decimated in a three way pot just moments before, got the last of his chips into the middle pre-flop with A♥ K♠ against Price´s 4♥ 4♣ and twenty-six other players breathed a sigh of relief as Price´s Fours held to eliminate Londt and end the day´s play.

Price leads a trio of players who have broken away from the main body of players – having amassed 753,000 chips ahead of Day 1A chip leader Dominik Nitsche (696,000) and Wesley Weigand (684,000) – with the fourth biggest chip stack – 415,000 chips – belonging to Ayaz Manji, with Jason Strauss (405,000 chips) hot on his heels in fifth. Day 1B chip leader, Sunil Devachander, retained an above-average chip stack of 295,000 after eliminating the dynamic Jason Hartman (A♣ K♠ > A♥ J♥) , but it was not such a profitable day for two players who had performed well on Day 1B – Jerome Bradpiece and Gideon Scheepers – who finished with chip stacks of 115,500 and 111,000 respectively.

Looking Ahead to Day 3 of the WPT SA

When play recommences at the Emperor´s Palace Hotel Casino in Johannesburg, there is a little time remaining in Level 18 (blinds 3,000/6,000 – ante 1,000) and the plan is to continue play until only six players remain in the WPT SA Main Event. After eight more players re-entered prior to the start of play on Day 2, the prize pool for the Main Event topped $735,000. Whoever emerges victorious on Friday will be the happy recipient of $206,153 while the first player out today will leave Johannesburg with a respectable $6,626.