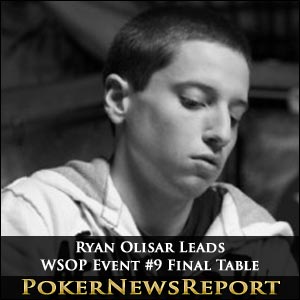 As the only female still alive in the event, Philadelphia’s Musumeci has the opportunity to become the first woman to secure a gold bracelet in an open tournament since Brooklyn’s Team PokerStars Pro Vanessa Selbst took down the $1,500 buy-in Pot-Limit Omaha event #19 back in 2008 for $227,965.

She made her move up the chip counts midway through Day 3, doubling-up on Olisar after her pockets tens held against the ace-king of the close-of-day chip leader. Thereafter, the WSOP Circuit regular steadily climbed up the rankings to have a great chance of breaking that four-year duck!

Day 3 began with 33 players, but it only took a few hours before the last nine were known, when American Aviraham Lovton exited in 10th place for $46,413 as the final table bubble boy.

California’s Rast – who had started the day as chip leader – limped before Duhamel raised to more than 300,000 to have just about 100,000 left. But Florida’s Barry Hutter shoved all-in for approximately 600,000 as the action folded around to Rast, who took his time before pushing out a call. Duhamel, understandably, placed the remainder of his stack into the middle.

However, Rast wasn’t the only player to notch a double knockout as Olisar managed the same feat when his A♦ K♥ improved to a diamond flush to send Andrew Rennhack (13th for $36,303) and Giorgio Medici (12th for $46,413) to the rail.