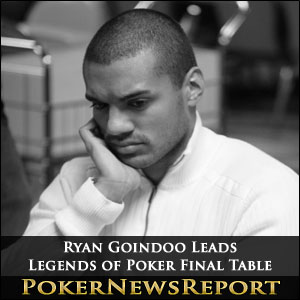 The expected quick penultimate day of the WPT Legends of Poker Main Event failed to materialise at the Bicycle Casino in Los Angeles, after it took almost five levels of play to reduce the opening field of fifteen players down to a final table of six.

When the cards were eventually put away to await the climax of the event tomorrow, it was Ryan Goindoo – second in chips after the combined Day 1s – who was on top of the leaderboard; but facing a battle for the $613,355 first prize with the irrepressible Phil Laak.

Day 4 of the WPT Legends of Poker Main Event started off as Day 3 had finished – with chip leader Patrick Karschamroon bossing the table and eliminating Ron Jenkins in one of the first hands of the day 10♣ 10♠ > A♥ Q♥. However, he was knocked off the top of the leaderboard soon after when Dan Heimiller (A♦ J♦) called Karschamroon´s (6♣ 6♠) post-flop shove on a board of J♣ 4♣ 2♥ and Heimiller´s pair of Jacks held.

Phil Laak also did his prospects of a second WPT Championship win when eliminating Richard Munro A♥ A♦ > A♠ K♦; and, before the end of Level 25 we had lost three more players – Stephen Graner (Q♥ 5♥) missing his flush draw against John Gordon (A♣ 3♣), Sam Barnhart (A♣ J♣) failing to improve against Shahen Martirosian (5♥ 5♣) and Cherng Hua (A♥ K♥) also missing the board when up against Alexandru Masek´s J♦ J♣.

Gordon on a Roundabout as Masek Nicks Lead

As Level 26 began (blinds 20,000/40,000 – ante 5,000), the ten remaining players congregated around one table and it looked as if the fast pace of eliminations were going to continue when Ryan Goindoo (K♥ 6♠) caught trip Sixes to send Brian Gorman (A♠ Q♣) out of the tournament in tenth, but then the pace of the action slowed considerably.

Several valuable hands played out over the rest of the Level – John Gordon took a stack of chips from Ryan Goindoo A♥ 9♥ > 8♦ 8♠ before Gordon lost a major pot to Patrick Karschamroon´s set of Eights. Gordon got his revenge on Karschamroon when he flopped a King-high Flush and got three streets of value, but the chip leader at the end of the level was Alexandru Masek – who had built his stack to more than 4 million chips after some aggressive post-flop play had taken down a series of pots without a showdown.

Goindoo into the Chip Lead – Masek and Laak in Pursuit

Ryan Goindoo shot into the chip lead during Level 27 with the elimination of Shahen Martirosian in ninth (A♥ J♥ > J♠ 7♠) – the first player to bust from the event in more than two hours – and then Goindoo extended his advantage in Level 28 (blinds 30,000/60,000- ante 10,000) when turning trip Aces to relieve John Gordon of 825,000 chips. Several more uncontested pots saw Goindoo chip up to nearly six million chips, and it could have been more had Dan Heimiller not rivered a Straight when well behind in a A♠ 3♦ > A♣ 7♥ flip.

Alexandru Masek was not relinquishing the chip lead without a fight, and closed up behind Ryan Goindoo when busting Garrett Greer in eighth (Q♥ Q♠ > Q♣ 6♦), but Masek was then himself the victim of pocket Queens as Jordan Cristos managed a valuable double-up (Q♣ Q♠ > J♥ J♦) and he also doubled up Phil Laak (9♥ 8♣ for Trip Eights > 7♣ 7♦) before Jordan Cristos brought the proceedings for the day to a close with the elimination of Patrick Karschamroon (J♦ J♠ > A♠ Q♠) in seventh.

When the six remaining players take their seats at the Bicycle Casino for the conclusion of the WPT Legends of Poker Main Event, the game will be a few minutes away from the end of Level 29 (blinds 40,000/80,000 – ante 10,000). Ryan Goindoo and Phil Laak look to be the two to beat, but Jordan Cristos shot into contention with his late double up and elimination of Patrick Karschamroon and Dan Heimiller at the foot of the chip counts has proved to be resilient – if not lucky!