Ryan Foster admitted to picking up some nice spots as he picked up the GukPT trophy and winner´s cheque for £62,120 at the end of the record-breaking Goliath. 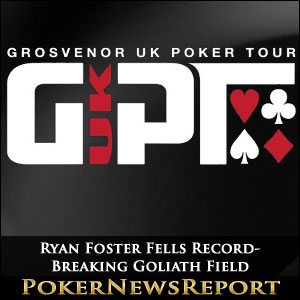 Ryan Foster admitted to picking up some nice spots as he picked up the GukPT trophy and winner´s cheque for £62,120 at the end of the record-breaking Goliath.

An incredible 3,394 entries were received for the GukPT Goliath in Coventry last week; annihilating the record set earlier this month at the Beijing Millions (2,732) and smashing the £250,000 guaranteed prize pool for the event.

507 players returned for Saturday´s Day 2, during which the 342-player bubble was burst when Theodoulos Georgio lost the majority of his chips against Mihaly Jancso J♣ 8♥ > J♠ 2♣ (both players hitting two pairs) and the last of them J♣ 7♠ > A♥ 6♥ against Tenille Adams, when Adams also hit two pairs.

Following the inevitable post-bubble collapse of the field, just twenty-six players returned to the Ricoh Centre for Sunday´s final day and, after an incredible fourteen eliminations within the first two levels, the field quickly reduced further.

The Price is Right for Neville

The first forty minutes of the GukPT 2014 Goliath Final Table were fairly quiet in comparison to the flood of action that had happened previously; but the eliminations were soon about to start – Liam Horton´s A♣ J♥ failing to connect with the board and Horton busting in ninth place at the hands of Neville Price (K♦ K♥).

Horton was soon joined on the rail by Phil Stein, whose K♦ 10♥ was out-kicked by Neville Price´s K♥ Q♥ – Price moving to the top of the leaderboard by default due to Ryan Foster doubling up against Mark Adams A♣ K♣ > 9♦ 9♠.

Ryan Foster took a slice of Neville Price´s stack with a pair of Nines against Price´s Jack-high bluff and, as the blinds increased to 250,000/500,000, Foster was in a three-way tie for second place with Neville Price and Arjun Ruparel, with Mark Adams back at the head of the chip counts and seven players remaining.

Foster moved into a clear second place when eliminating Adam Nice in seventh place K♦ 10♣ > K♠ 4♦, and he closed the gap between himself and the chip leader to just a few big blinds when rivering an Ace to bust Mihaly Jansco in sixth place A♠ K♣ > 8♦ 8♥. However, not every pot went Foster´s way, and he doubled up Arjun Ruparel 4♠ 4♥ > A♠ Q♠ to be knocked back down to around 9 million chips.

A flurry of double-ups occurred either side of the dinner break with Ryan Foster being the primary beneficiary. A pair of Jacks was good enough to scoop the pot against Neville price´s A♦ 10♣, and a pair of Kings held against Rodrigo Hernandez´ A♥ Q♥ saw his chip stack soar up to 29 million. Mark Adams maintained the chip advantage by eliminating Hernandez in fifth place A♥ K♥ > K♠ 4♠ and Arjun Ruparel in fourth place K♦ K♥ > Q♥ 9♥, but the pivotal hand of the Goliath Final Table was just about to happen.

Ryan Foster started the action by making it 1.6 million to play (blinds now 400,000/800,000 – ante 80,000) and both Neville price and Mark Adams called. Following the flop of 8♦ 8♥ 4♠, Adams raised the stakes to 3 million chips, Foster called and Price folded. Adams was again the aggressor after the 3♦ on the Turn – raising the pot another 2 million chips – but both players chose to check the 5♦ on the River – Adams turning over K♦ 4♣ for a pair of Fours, and Ryan Foster revealing J♥ J♠ to collect the 14.8 million chip pot and have more than half the chips in play.

Thereafter the contest was over quickly. With the big blind now 1 million chips, Ryan Foster moved all-in to attack Neville Price´s big blind. Price made the call and was temporarily ahead in the 7♦ 9♥ -v- A♠ 3♣ coin-flip; but an Ace on the flop gave Foster the hand and sent Neville Price to the rail in third place – Ryan Foster taking a 65.5 million -v- 18.3 million chip advantage into the heads-up against Mark Adams.

Mark Adams started brightly, and chipped up to 30 million without a hand going to showdown, but two pairs for Ryan Foster (with A♥ 8♣) restored the respective chip counts to what they were when the heads-up began. The final hand came almost ninety minutes into the heads-up – Mark Adams moving all-in for his last 10 million chips and Ryan Foster making the call.

The flop of Q♣ 3♦ J♠ put Foster well ahead in the hand, but the A♠ on the Turn gave Adams the hope of a backdoor flush. Unfortunately for Adams, the 4♦ blanked on the River, meaning that Ryan Foster had felled the record-breaking Goliath field to win the £62,120 first prize.