Following a new ruling in the Russian Supreme Court, online gambling websites may find themselves blocked by Internet service providers. 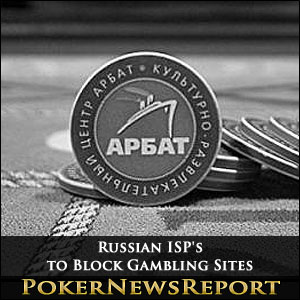 Following a new ruling in the Russian Supreme Court, online gambling websites may find themselves blocked by Internet service providers.

Online gambling is illegal in Russia and according to a new ruling by the Russian Supreme Court an Internet service provider allowing access to these sites may be considered legally the same as if it were operating the site. This new ruling may have significant ramifications for the International online gambling industry.

It is expected that a number of Internet service providers will block online gambling sites in an effort to comply with the law. It has not been clarified if this precautionary measure will affect the online poker industry or not.

Poker is considered a game of skill and therefore often falls into a separate category from other gambling games. Regardless of the distinction, the online poker industry has expressed its concern over these developments.

Russia, with a population of 142 million people, is a source of a high number of players, particularly fish, at online poker sites and the possibility of losing these players is alarming to many online poker operators.

Even more so, the Supreme Court ruling has broadened its scope when discussing online gambling and has included the dissemination of information related to the implementation of activities of gambling. This would result in an obligation to disconnect even sites that contain only information about gambling portals.

Following the update of laws in 2009, Russia shut down 4,000 illegal casinos and more than 25,000 ‘gambling parlors.’ Up until now, while only gambling was illegal, providing access to those same sites was not covered by the laws. This appears set to change with the new ruling by the Supreme Court.

Previously, Internet service providers continued to allow access to online gambling sites until those sites were officially put on the blacklist of the Justice Ministry. The new laws will require the ISPs to become proactive in blocking sites with the threat of license revocation hanging over their heads if they don’t.

Whether these laws will affect sites such as PokerStars is still unclear; however the company has reason to be concerned as it has only recently settled its case in the US defending itself against a number of federal crimes.