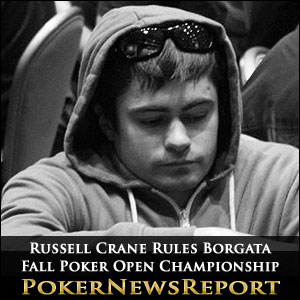 Thirty-six players returned for Day 3 of the Borgata Fall Poker Open Championship, and there was a classic conclusion to the tournament after many of the overnight favourites for the event crashed out before the final table.

In the opening few levels, players hit the rail with alarming regularity, and previous chip leaders John D´Agostino (bust out in thirty-fifth), TJ Shulman (thirty-first) and Jordan Christos (twenty-seventh) were all sent to the rail before the first break.

Incredibly, the early departures from the Borgata Fall Poker Open Championship also included overnight chip leader Jake Schwartz – who doubled up several players during the first couple of levels before getting the last of his chips in with pocket Queens against Alex Shteyman’s suited Ten-Seven. Shteyman hit a runner-runner flush, and Schwartz was eliminated in twenty-fourth place.

A Hat-Trick of KOs Puts Crane in the Lead

Out of the early carnage Russell Crane emerged as the chip leader. He sent Keith Crowder to the rail in 21st place (A♣ K♠ > A♥ 10♥), busted Nick Ghandi in twentieth place (Q♥ Q♦ > J♣ 8♠) and eliminated Fernando Diaz in nineteenth place (Ace-Queen > pocket Sixes) in a trio of knockouts, which saw him chip up close to 3 million chips by the time the tournament was reduced to two tables.

Scott Blackman temporary took the chip lead as the final eighteen players were reduced to nine but, by the time the official Borgata Poker Open Championship final table was set, Russell Crane was back at the top of the leaderboard:

Wong Up, Josephy Down and Holley Battles Bravely

The first action of the Borgata Poker Open Championship Final Table saw She Lok Wong double up against Scott Blackman Kings > Tens to move into second place on the leaderboard; but when Cliff Josephy put his tournament life on the line with Ace-King soon after, he was not so fortunate – running into Russell Crane´s pocket Nines, which improved to a set on the flop. Josephy out in ninth place.

John Holley put up a fantastic battle to cling onto the last of his chips before he was eliminated in eighth – being reduced to just 40,000 chips (blinds now 25K/50K – ante 5K) when Ken Silberstein turned a set of Queens to best Holley´s paired Ace, but doubling up twice against Kyle Bowker (Ace-Seven > pocket Fives) and Scott Blackman (Ace-Five > pocket Eights) before eventually succumbing to Russell Crane King-Eight > Six-Four.

Russell Crane increased his lead at the final table of the Borgata Fall Poker Open Championship when busting out Scott Blackman in seventh place. Blackman got all-in with Ace-Queen (the hand we said on Tuesday was the most expensive in poker) and was called by Crane holding pocket Fours. The Fours held to chip Crane up to more than 6.7 million chips.

However, rather than running away with the event, the chip counts at the top of the leaderboard tightened up when Kyle Bowker moved all-in with pocket Jacks and received a call from Tyng Low (Ace-King) who hit an Ace on the flop to eliminate Bowker in sixth, and then She Lok Wong sent Tony Abi-Yaghi to the rail in fifth when his Ace-King out-kicked Abi-Yaghi´s Ace-Five after both players had paired their Aces.

Ken Silberstein had used his tight table persona well to keep up with Tyng Low and She Lok Wong in the battle for the minor places behind Russell Crane; but he was eventually eliminated in fourth place when he shoved all-in with pocket Threes and failed to improve passed Tyng Low´s pocket Jacks. Down to three players – and with big jumps in the payouts between third and first – the game tightened up considerably.

Almost ninety minutes of three-handed play took place – with Russell Crane maintaining his chip advantage over Tyng Low and She Lok Wong – before Low shoved from the Big Blind in response to Russell Crane´s min-raise from the button. Crane made the call and turned over Aces. Low had King-Three, and was not even close to a sweat as he was eliminated in third place – Russell Crane taking a 13.25 million -v- 5.55 million chip advantage into the heads-up against She Lok Wong.

The climax of the Borgata Poker Open Championship was exceptionally tense. Despite Russell Crane´s significant chip lead, She Lok Wong edged back into the event. As blinds rose to 60K/120K with a 20K ante, Wong took a handful of small pots to increase his stack and to move within a couple of blinds of Russell Crane. Crane fought back and re-established his lead, and then, after nearly two hours of heads-up play – the last hand came.

She Lok Wong opened for 480,000 chips and Russell Crane made the call. After the flop of 10♥ 8♥ 7♠, Crane checked, Wong bet a million and Crane moved all-in. She Lok Wong called for his tournament live and the cards were on their backs:

The Turn card was a Nine, but not the right Nine for Wong; for although the 9♥ completed his straight draw, it also completed Russell Crane´s flush. The 2♠ on the River finished the board, and Russell Crane had won the 2013 Borgata Fall Poker Open Championship.

The final Main Event of the Borgata Fall Poker Open series was a $200.00 + $30.00 buy-in NL Hold´em Deep Stack tournament, with unlimited rebuys for the first six levels. The one-day tournament attracted 231 entries to create a prize pool of $46,200 which was shared among the top twenty-seven players.

The conclusion of the final event was played out while the final table of the Championship Event was still in progress, so there was no reporting on the tournament. Mikhail Sher´s winning hand was 9♦ 2♣, so we reckon he enjoyed a little good fortune in the final hand to collect the winner´s trophy and $12,550 first prize.