Russian Ruslan Vlasov has taken down the first leg of the Genting Poker Series (GPS) in Birmingham’s Star City for £16,600 and a £1,600 seat for the Grand Final in December. 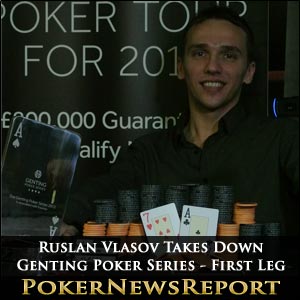 Russian Ruslan Vlasov has taken down the first leg of the Genting Poker Series (GPS) in Birmingham’s Star City for £16,600 and a £1,600 seat for the Grand Final in December.

Vlasov overcame Englishman Neil Ryder in their heads-up battle of the £430 buy-in main event to emerge victorious after a 365-strong field – which included re-entries – created a prize pool of £146,000 that ensured 46 players were paid.

Ryder collected £13,700 for his runner-up spot, while fellow Englishman David L’Honore left with £17,500 in third place after the last six players agreed on a stepped deal based on their chip counts on the fourth and finals day’s lunch break.

The deal also guaranteed extra cash depending on a player’s final position, but it was Vlasov who grabbed the £1,500+£100 Grand Final seat for the December 6 No-Limit Hold’em main event at London’s Palm Beach Casino with his victory.

Fourth place went to thoroughly entertaining Turkish pro Yucel ‘Mad Turk’ Eminoglu for £10,750, while places five to 10 were filled by English players, including eighth-placed Hendon Mobster Barny Boatman for a pay day of £2,190.

Level 29, with the blinds at 60,000 and 120,000 and an ante of 10,000, saw some impressive and exciting play as six players fought it out for glory – and cash, of course. There was something of a battle going on between Ryder and Eminoglu that saw the Englishman back down from what would most likely have seen the Turk eliminated in sixth place. Initially, Ryder moved all-in for his last 700,000 chips with A-K and was called by Eminoglu, who showed K-Q to be well behind the Englishman. Ryder stayed ahead through the flop and turn and was then rewarded with a river ace to double up. Then, soon after, Eminoglu shoved against big blind Ryder with K-3, only for his opponent to inexplicably fold A-10.

Sixth place – and £16,955 – went to Donoghue when his pocket twos met the A-K of Eminoglu. Only slightly ahead, the Englishman – who was second in chips at the time of the six-player deal and guaranteed at least £16,450 – was very unlucky to see the board come down 7-6-5-5-7 to hand Eminoglu two pair with the higher kicker. Short stack Jones exited a short while later in fifth place when he moved all-in with just five big blinds. However, his A-4 came up against Eminoglu’s kings and Jones was gone as no ace was forthcoming.

The gathered railbirds’ enjoyment must have dropped down a level or two when Eminoglu was eliminated in fourth place, though, when the Turk’s A-4 lost out to Ryder’s A-Q. On the button, Ryder raised to 250,000, only for Eminoglu to shove all of his one million stack into the middle. The Englishman thought about this massive decision for a couple of minutes, but this time made the call. The 7-9-6 flop changed very little, although a second nine on the turn provided some hope of a split pot for Eminoglu – only for a jack to arrive on the river that sent the Turkish pro out for £10,750. Eminoglu’s exit left us three-handed with £6,000 still available, as well as the trophy and a place at the Grand Final.

Vlasov appeared to move up a gear at this point and zoomed into a big chip lead when seeing off Ryder’s raise by moving all-in. The Russian showed A-K to dominate Ryder’s A-7. Vlasov’s hand held when the board ran out 3-5-9-J-8 to take him above the four million mark. Vlasov eliminated another Englishman in L’Honore – who still collected £17,550 – in third place not long after taking that huge chip lead. Ryder, on the button, raised, but was met by a quick all-in from Vlasov and a swift call from L’Honore. The original raiser folded without a second thought, while Vlasov showed K-Q to be way behind the queens of L’Honore.

However, with a king-high flop – and no help for the Englishman on the turn or river cards – that left us heads-up between Vlasov and Ryder, with the Russian holding a hugely dominating stack of approximately eight million to one million. Ryder fought back for a while, but couldn’t find the cards to take down this opening series event, so giving Vlasov the title.

Other notable in-the-money finishers included Hendon Mobster Joe Beevers, who took home £1,605 for finishing in 17th place, while another member, Ross Boatman – Barney’s brother – picked up £1,315 for his 27th-place exit.

Leg two of the Genting Poker Series pulls into the world-famous Fox Club in London from March 28 to April 1 and will feature a £400+£30 No-Limit Hold’em main event that runs from the 29th to the first.