Ruslan Vlasov has won the £300 buy-in No-Limit Hold’em March main event at the Fox Poker Club for £9,370 after seeing off 104 opponents at the famous London venue. 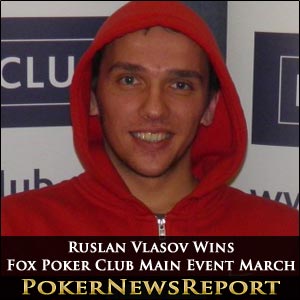 Nottingham-based Ruslan Vlasov has won the £300 buy-in No-Limit Hold’em March main event at the Fox Poker Club for £9,370 after seeing off 104 opponents at the famous London venue.

The former Dusk Till Dawn dealer has now secured two titles within a few weeks after last month picking up £18,200 for taking down the £400 buy-in No-Limit Hold’em main event at leg 1 of the inaugural Genting Poker Series in Birmingham’s Star City casino.

Vlasov only recently decided to take part in live tournaments and will certainly be thrilled to have secured his second victory already when beating Adrian Smith in their heads-up battle in London to end an event that offered a prize pool of £31,500.

Ruslan’s victory was confirmed when his pocket tens stayed in front of the A♦ 2♦ held by Smith. The eventual champion must have been worried, though, when two diamonds arrived on the flop to give his opponent a flush draw – only for the turn and river to be blanks.

The unlucky Smith pocketed £7,470 for his runner-up spot, to add to the Londoner’s second place in January’s staging of the monthly event at the Fox Poker Club, which netted him £7,720 at the time.

The next Genting Poker Series stop arrives at the Fox Poker Club on March 27 for six days’ play until April 1. Qualifiers have already started at the Shaftesbury Avenue club, while players can also qualify online at Genting Poker.