Don’t panic all your poker fans out there – the World Poker Tour (WPT) will soon be back when the carnival pulls up in north-east Italy for WPT Venice early next month. 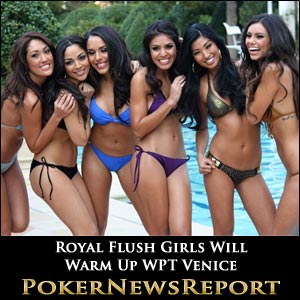 Don’t panic all your poker fans out there – the World Poker Tour (WPT) will soon be back when the carnival pulls up in north-east Italy for WPT Venice early next month.

The WPT’s 10th season will also return on Fox Sports Net (FSN) for all you USA-based poker fans on Sunday, February 12, at 8pm and 11pm, as well as being repeated on Wednesdays at 11pm, so there is a lot to look forward to.

And it gets even better as FSN – following a successful ninth season that witnessed ratings increase by 30% – have upped the number of episodes by 11 to 37, with each event being split into three to give fans of the world’s greatest game extra action ahead of the final table, as well as some additional footage from behind the scenes.

There is also a preview show planned to kick off Season 10 as the tour take in 12 venues over 37 weeks.

It’s Chilly Out There…

However, we know how chilly it can be in certain locations across the globe right now, so here’s a little something to warm the hearts of all the lads out there. I shall apologise well in advance to all you avid female followers of poker as this one is mainly for men as it’s a short video of the WPT’s Royal Flush Girls working on a bikini photoshoot. But don’t panic – and please don’t have a go at me – as you will surely get to see the likes of Gus Hansen, Phil Ivey, Phil Laak, Carlos Mortensen, Team [geolink href=”https://www.pokernewsreport.com/everest-poker”]Everest Poker[/geolink] Pro Fabrice Soulier, Oleksii Kovalchuk and Patrik Antonius many times over the course of the next 11 months…although they might not be down to their boxers!

Anyway, where was I? Ah, yes. So, with the tour enjoying a short break following Englishman David ‘Dubai’ Shallow’s victory at WPT Ireland on January 9 for a first prize of $289,031, the tour’s website have decided to give poker fans a sneak preview of the Royal Flush Girls braving the cold Las Vegas air at The Bellagio last month to get another photoshoot under their perfectly fitting belts.

Venice’s splendid Casino di Venezia Ca Vendramin Calergi will sparkle even brighter way before the start of the tour’s €4,950 buy-in main event as Tugba, Danielle, Angelique and Ivy will be mixing with players and fans throughout the tour stop that takes place from February 6 to 10.

The classy quartet of Royal Flush Girls will also attend welcome parties for players, as well as other casino events, plus they’ll be chatting to fans and interviewing many of the star pros during the tournament.

That stellar line-up will also include WPT presenter Kimberly Lansing and high stakes pro Tony Dunst, who is the analyst on the tour’s Raw Deal television segment.

But the Royal Flush Girls will still be about during the tournament, until ultimately presenting the cash following the crowning of another WPT Venice champion.

Every competitor will certainly be determined to emulate 29-year-old Shallow’s victory last month, when he also picked up a WPT World Championship seat worth $25,000 in Dublin’s CityWest Hotel.

The first Irish WPT main event attracted a healthy 338 starters with its €2,500 buy-in, but organisers in Italy will expect a larger field for their €4,950 main event.

In the meantime, here you can watch the video mentioned above: