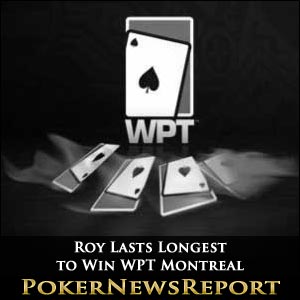 It was a story of “no game for old men” at the climax of the World Poker Tour Man Event in Montreal as two 25-year-old students from Quebec battled it out into the early hours for the WPT title and first prize of $779,710. Roy, who started the day third in chips, showed great maturity and timing to eliminate four of his five final table opponents, but not before we had witnessed an explosive start to proceedings.

Setting the Scene for the WPT Montreal Final Table

At the start of play it was 51-year-old Sylvain Siebert – playing in his first tournament with a $1,000+ buy-in – who held a narrow chip advantage over Jeff Gross, with two WSOP gold bracelet winners in the chasing pack and the mightily experienced Gavin Smith most in danger of losing his seat.

The tournament clock had been reset for the beginning of the final table but as Level 31 re-started (blinds 60,000/120,000 – ante 20,000) Peter Kaemmerlen showed he was not in the mood to hang around. Kaemmerlen raised from UTG to 300,000 chips with J♥ J♦, Jeff Gross re-raised to 1,260,000 and Kaemmerlen responded by shoving the remainder of his chips into the middle. Gross called and revealed A♥ 10♦.

The flop of 7♠ 5♦ 4♣ was good for Kaemmerlen, and it looked like he was going to double up in the first hand when the 9♥ was dealt on the turn, but the A♦ spiked on the river and sent Jeff Gross into a commanding chip lead – Kaemmerlen being unlucky to be eliminated in sixth.

Siebert Takes a Knock and then Bluff-Busts

Three hands later it was the turn of Pascal Lefrancois to risk his tournament life; however, this time, most of the action happened towards the end of the hand. On the flop of 8♣ 7♣ 3♥ Sylvain Siebert (A♣ 7♠) raised by 440,000. Pascal Lefrancois (Q♣ J♣) called. Following the turn of 9♣, Lefrancois was the aggressor – betting 820,000 chips – to which Siebert responded by moving all-in. Lefrancois called and saw that his made flush could be out-drawn by a further club. Fortunately for him, the J♥ was dealt on the river and the overnight chip leader was demoted to fourth place of the remaining five players.

Over the next hour, Siebert moved his depleted stack into the table several times without any callers. At the beginning of Level 32 he gained a vital double up with a runner-runner flush against Jonathan Roy, but in the very next hand shoved his stack into the middle once again from the small blind with nothing better than 6♣ 5♦. Jonathan Roy in the big blind made the call and turned over Q♣ Q♠ – the Queens getting home safely to bust Siebert in fifth.

Smith Blossoms then Fades and Dies

During the first couple of hours of the WPT Montreal Final Table, Gavin Smith had used his experience well – waiting for the right moment to steal blinds with well-sized pre-flop bets and gaining a vital double up against Jeff Gross when he flopped a pair in a Q♠ J♠ > K♠ 9♥ race. But, having built his chip stack to over 4 million chips, he lost more than 2 million to Pascal Lefrancois when Lefrancois flopped trip Jacks, and then bust out of the tournament in unfortunate circumstances against Jonathan Roy.

In a mirror of Sylvain Siebert´s departure, Smith shoved from the small blind into Jonathan Roy in the big blind. Unlike Siebert, Gavin Smith had a hand – A♦ 5♠ – and looked as if it may hold against Roy´s K♣ 7♠ on the flop of 8♦ 8♠ 2♣. However, the 7♦ appeared on the flop to pair up Roy´s undercard and, with no Ace on the river to save him, Gavin Smith was eliminated in fourth.

Three Handed Play is a Classic

Shortly before Gavin Smith´s departure, Pascal Lefrancois had followed up on his trip Jacks hand by winning a mighty 4 million chip pot against Jeff Gross when rivering a full house. As the dust settled after Gavin Smith´s elimination, the chip stacks of the three remaining players looked like this:-

Level 33 was played like a game of chess (blinds 100K/200K – ante 25,000). Not one hand went to showdown and at the end of it both Roy and Gross had added to their chip stacks at the expense of Lefrancois, but Lefrancois still held a comfortable lead of 15 big blinds.

Roy Moves Up and Into the Lead

As Level 34 began (blinds 125K/250K – ante 25,000), the balance of power swung towards Jonathan Roy. Roy won valuable pots from both Lefrancois and Gross with major post-flop bets and crept into a narrow chip lead. Again the level was played without a showdown and it was not until mid-way through Level 35 (Blinds 150K/300K – ante 30,000) before the next significant action happened.

Jeff Gross called Pascal Lefrancois´s pre-flop raise of 600,000 and, following the flop of Q♠ Q♣ 7♥, snap called Lefrancois´s shove. Lefrancois turned over 3♣ 3♦, but Gross held the advantage with 6♦ 6♥. The turn of 5♠ and 7♦ meant that both players had two pairs (Queens and Sevens), but Jeff Gross won the pot courtesy of his Six kicker and doubled up. With Lefrancois´s chip stack almost halved, Jonathan Roy now had a commanding chip advantage.

The Fireworks Begin as Gross Goes up in Flames

After seven hours of play, the climax to the WPT Montreal Main Event came to life. Jeff Gross was reduced to just two big blinds after seeing his flopped set of fours come second to Pascal Lefrancois´s Heart Flush and then he tripled next hand up in a three way pot in which his paired A♦ beat Roy´s paired 4♣ and Lefrancois´s paired 9♦. Lefrancois then doubled up against Jonathan Roy when his A♠ K♦ hit K♠ 9♠ 5♠ on the flop, the A♦ on the turn and the K♣ on the river to give him a Full House.

Jeff Gross was shoving almost every hand thereafter and managed to build his chip stack back over 2 million, but it all fell down again when he shoved one too many times and ran his K♦ Q♣ in Jonathan Roy´s A♠ Q♠. Roy hit the A♣ on the flop and it was all over for Gross, who finished the tournament in third place. Roy meantime took a 19.175 million -v- 15.925 million chip advantage into the heads up against Pascal Lefrancois.

Jonathan Roy extended his chip advantage early into the heads-up with a flopped 8 high straight, but Lefrancois battled back and took the chip lead in the heads-up for the first time when taking down seven uncontested pots in a row. After another hour without a hand going to showdown as the two players played cat and mouse, the final exploded into life in one significant hand.

Pascal Lefrancois opened with his now almost habitual 1 million chip pre-flop raise. Roy re-raised to 2.4 million chips to which Lefrancois responded by moving all-in with 6♥ 6♠. Roy made the call with K♠ Q♣ and needed to connect with the board in order to stay in the tournament.

The flop of K♦ 7♥ 7♣ sent Roy´s supporters on the rail wild with excitement and, with neither the Q♦ nor J♥ helping Lefrancois, Jonathan Roy took all the chips except the 525,000 by which Lefrancois had been leading before the hand.

With just one big blind remaining, Lefrancois was all-in when he posted his blind, and Jonathan Roy made the call – Roy revealing K♠ J♥ to be way ahead of Lefrancois´s 8♣ 3♥. The flop of K♣ J♣ 4♦ effectively ended the contest (Roy flopping two pairs) and Jonathan Roy had won the inaugural WPT Montreal and capture the $779,710 first prize.