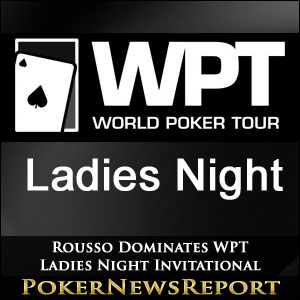 During the recent WPT Legends of Poker event at the Bicycle Casino in Los Angeles, an invitational “Ladies Night” poker tournament was organised on behalf of various women’s´ charities; with $25,000 of prize money distributed between the six players´ choice of charities and the winner of the event being awarded a seat at the $25,000 WPT World Championship.

PokerStars Pro Vanessa Rousso sat down alongside outgoing WPT anchor Kimberly Lansing, 888Poker´s Jessica Dawley, the woman who has come closest to winning a WPT open event Lily Kiletto, Party Poker´s Liz Lieu and qualifier from the LIPS charity tournament Sunny Chen, as all six women were given 250,000 chips to help them navigate the early blinds of 3,000/6,000.

Rousso in Charge from the Off

Vanessa Rousso started strongly – taking the first two hands in the game to see the flop after forcing post-flop folds from Liz Lieu – and her ongoing aggression enabled to hold a sizeable chip advantage at the end of Level 1 – which she maintained into Level 2 (blinds 5,000/10,000 – ante 1,000) despite doubling up Lily Kiletto.

Sunny Chen may have been a qualifier on a table of seasoned professionals, but she had not wilted under the pressure of being among such a talented ensemble and was unfortunate in the way she was eliminated from the tournament. Following Liz Lieu´s 25,000 chip raise from the button, and Vanessa Rousso´s call from the Small Blind, Chen moved all-in for 98,000 chips. Lieu and Rousso both made the call and the cards were on their backs:-

Despite doubling up Liz Lieu during the elimination of Sunny Chen, Vanessa Rousso still held the chip advantage, and she took four of the next five hands pre-flop to add a substantial amount of blinds and antes to her stack. Rousso then bust out Kimberly Lansing A♦ 3♠ > 10♣ 10♥ when pairing her Ace on the flop (Lansing collected $2,500 on behalf of the charity Rape, Abuse & Incest National Network) and – as Level 3 began – eliminated Liz Lieu Q♥ J♣ (Queen paired) > A♣ 8♣. Liz Lieu picked up $3,750 on behalf of the Dr Susan Love research Foundation.

At this point, Vanessa Rousso had 65% of the chips in play and it looked as though the tournament was developing into a very one-sided affair. However, Jessica Dawley had other ideas and after taking more than 200,000 chips from Rousso in a paired A♣ > paired Q♦ hand, Dawley became the aggressor and forced Rousso out of further valuable pots, chipping up to within two Big Blinds of the chip leader.

Rousso Takes Dawley in the Heads-Up

Despite the charitable nature of the WPT Ladies Night Invitational, there was not a lot of charity shown at the table. Vanessa Rousso continued her aggression both pre-flop and post-flop, while Dawley battled back whenever she could – at once stage nicking a narrow lead after battering down the Rousso aggression in four consecutive hands.

However, as Level 5 began (20,000/40,000 – ante 5,000), Rousso cranked the aggression up a notch, and she turned a 150,000 chip deficit into a 2:1 chip advantage without one hand going to showdown. When one eventually did, it signalled the end for Jessica Dawley – who called Rousso´s (A♥ K♠) pre-flop shove with K♣ 6♠. The flop of 8♣ 7♦ 4♦ offered Dawley hope of a gutshot straight, but the 8♠ and A♠ on the Turn and River gave Rousso two pairs (Aces and Eights) and eliminated Jessica Dawley in second place.

Vanessa Rousso´s victory enabled her to raise $6,250 for the National Council for Research on Women and win a seat in the WPT Champions Event. Jessica Dawley collected $5,000 on behalf of the Domestic Violence Project of the Legal Aid Society of Palm Beach County for her second place finish, with the full finishing order and charity winning as follow:-