Hardy continued his good start to 2012 with victory in the Palm Beach Big Game in London as he outlasted 40 other entrants to pick up the $26,153 top prize. 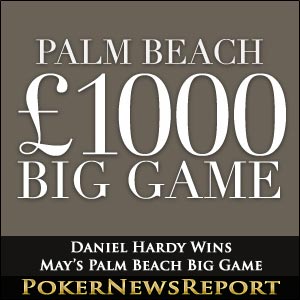 Youngster Daniel Hardy continued his good start to 2012 with victory in the £1,000 buy-in No-Limit Hold’em Palm Beach Big Game in London as he outlasted 40 other entrants to pick up the $26,153 top prize.

In what is considered one of the British capital city’s toughest recurring events, Hardy – who had finished third in February’s staging of the tournament behind Hit Squad member Sunny Chattha and Nicolas Irving for $15,268 – finally secured his first live success when beating London’s Philip Patrick in their heads-up encounter that left the runner-up with $12,915 for his troubles.

Hardy has already made three final tables this year, having also taken the runner-up spot in the £500 buy-in No-Limit Hold’em event at the Super Stack Series High Roller London – also at the Palm Beach Casino – for $9,656, while he secured a ninth place finish for $2,305 in the €500 buy-in No-Limit Hold’em Six-Max event as part of the Irish Open early last month in Dublin.

But the young player certainly didn’t have it easy at the Mayfair venue for this debut triumph, having to see off the likes of experienced London trio Robert Cooper (third for $9,606), Jim Kerrigan (fourth for $6,296) and Guy Bowles (fifth for $4,310), as well as Arjun Pasricha (sixth for $3,309) at the eight-handed final table.

Final Table Payouts from the May Palm Beach Big Game