Ronny Kaiser on a Swiss Roll at EPT Tallinn

Switzerland has a poker hero at long last after Ronny Kaiser overran the final table at the PokerStars European Poker Tour (EPT) main event in Tallinn. 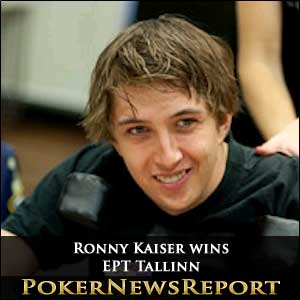 Switzerland has a poker hero at long last after Ronny Kaiser overran the final table at the PokerStars European Poker Tour (EPT) main event in Estonian capital city Tallinn to leave with €275,000 (approximately £240,000).

It took under four hours for the final table to be reduced to just two players at the opening event of the EPT’s eighth season as Ronny Kaiser and Gregorz Cichocki met in a heads-up clash that was over almost before it began, with the Swiss emerging victorious from his heads-up battle with the Polish runner-up in about 30 minutes.

Kaiser was obviously pleased with his momentous success in becoming the first Swiss to secure an EPT title when outlasting 281 other competitors, saying that “it’s very nice to win”, but felt his victory had been coming for quite some time after going “deep before” on many occasions at previous events, only to normally exit before making the final table.

He added that “this time, I thought, ‘I should win this’” after being the “chip leader for three days”. He is certainly correct in the observation as there could not have been a more deserving winner of the €4,250 buy-in No-Limit Texas Hold’em event at the impressive Swissôtel in this year’s European City of Culture.

The Swiss was in command now and even showed an eight high bluff to frustrate his opponent, but also gained maximum value with his pocket aces and two pair to see his chip lead stretch to seven million against Cichocki’s 1.5 million.

This heads-up dominance appeared to rattle Cichocki and, as we know, the Pole eventually made a final stand that failed to pay off, although he did leave with €180,000 (about £156,400).

This was, of course, Kaiser’s first major tournament win – and he achieved it in some style when, in the final hand of his head-to-head with Cichocki, the Swiss three-bet to 165,000 following the Pole’s initial 60,000 raise.

Cichocki, who held about one million chips, then moved all-in and Kaiser practically jumped out of his seat when making the call to show A♦ 9♠.

Kaiser felt confident from Day 1 of the event, saying that he believed he would become “the first EPT winner from Switzerland” and now has his eye on creating another piece of history – that of becoming the first double EPT winner when he will “be playing the EPT Barcelona, for sure”.

Cichocki has started the final day aggressively to move into the chip lead, but Kaiser was soon back on top when eliminating Finland’s Arvi Vainionkulma in eighth for €25,000 (£21,700).

Vainionkulma was certainly a bit unfortunate when his A♠ K♥ failed to pair as Kaiser’s pocket fours held firm.

Next to go, in seventh place, was another Finn in Sami Kelopuro, whose attempted bluff on the river with ace high failed to discourage Kaiser. The Swiss called Kelopuro’s all-in with a straight and the Finnish pro was gone for €35,000 (£30,400).

A couple of [geolink href=”https://www.pokernewsreport.com/pokerstars”]PokerStars qualifiers[/geolink] exited in quick succession soon after, with Britain’s Stuart Fox – much to his surprise – outlasting Norwegian Erlend Melsom to secure fifth spot, even though he had been left crippled when losing a huge pot to yet another Finn, Jani Sointula, as his A♥ Q♦ ran into K♣ K♠.

Fox was eliminated the very next hand when he was pretty well pot-committed after the majority of his stack was already on the table as the big blind. His pair of eights looked positive, but Kaiser found trip kings to send the Brit home with €55,000 (£47,800).

Sointula joined Fox soon after when Cichocki flopped a straight and gained maximum value from the Scandinavian, who called three times before then mucking on the river under intense pressure from the Pole.

With few chips remaining, Sointula – who battled back somewhat when doubling-up against Kaiser – was gone in fourth place for €80,000 (£69,500) as his A♠ K♦ failed to improve against the eventual champion’s 7♥ 7♠.

The action was fast and furious now as the subsequent hand saw the final home favourite, Raigo Aasmaa, eliminated in third for €110,000 (£95,600).

Aasmaa, in the big blind, three-bet all-in when holding K♥ 10♥, only to be met by Cichocki’s A♥ A♦, although it was a flush on the turn that gave the Pole the pot.

So, now it was heads-up and Kaiser emerged triumphant, although he found it amusing that he hardly played a pot against Cichocki before reaching heads-up play – even though the Pole had been to his left for the final two days of the event.

He said “it was funny (as) we were next to each other for two days, but the first big pot we played was when were heads-up”, although he was at pains to stress that “it wasn’t a conscious decision to avoid him…I wasn’t scared”.

The Swiss emphasised that “it wasn’t deliberate – we just busted all the other guys”.

Next up is the EPT Barcelona, which returns to its traditional end-of-summer slot with a €5,000+€300 main event that runs from August 27 to September 1 at the Gran Casino.

Top 10 placings and payouts from the EPT Tallinn main event: