Day 1A chip leader Ronnie Voth maintains his place at the head of the chip counts as the survivors come together on Day 2 of the EPT Berlin Main Event. 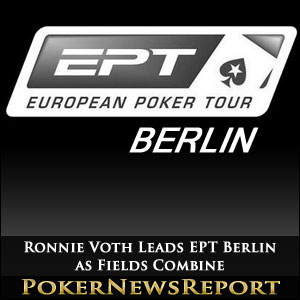 Day 1A chip leader Ronnie Voth maintains his place at the head of the chip counts as the survivors come together on Day 2 of the EPT Berlin Main Event.

Voth, who qualified for the EPT Berlin Main Event via one of the live qualifiers hosted at the Grand Hyatt Hotel, takes a narrow chip lead into Day 2 of the tournament ahead of fellow Day 1A survivors Mike Kunze and Thomas Richter, and ahead of the best performing player from Day 1B Michael Mizrachi.

Behind the three Germans and Mizrachi, a further 475 players will take their seats today with hopes of getting their hands on the €880,000 first prize after 912 players ponied up the €5,300 buy-in or qualified on PokerStars to make this the biggest EPT Berlin Main Event since Kevin MacPhee took down the tournament in 2010 for a €1 million payday.

Plenty of Stars on the Tables

When play resumes at the Grand Hyatt Hotel today at 2.00pm today, players will be entering Level 9 (blinds 400/800 – ante 100) and play is schedule to continue for six levels of 75 minutes and two levels of 90 minutes (subject to the whims of the tournament organisers). Those will not be concerned about being blinded out in the early exchanges include:-

In addition to the Berlin Cup won by Pieter de Korver at the weekend, there have been a host of side events at the EPT Berlin. In the (non-satellite) side events to have been decided so far, Mantas Visockis collected a first prize of €30,473 for winning the €330.00 buy-in NL Hold´em Event #5 while Rupert Elder picked up a cheque for €49,500 after victory in the €1,100 buy-in Turbo Event #7.

You can keep up to date with all the action at the EPT Berlin by following PokerNewsReport on Twitter.