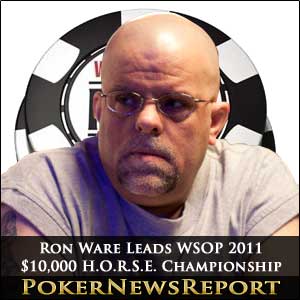 California’s Ron ‘Grumpy’ Ware won’t be too unhappy after the first day of the $10,000 H.O.R.S.E. Championship at the World Series of Poker (WSOP) in Las Vegas.

Ware should, in fact, be delighted as he heads into day two of the event at the Rio All-Suite Hotel & Casino as chip leader on 122,300. Just two other players from the original starting field of 240 ended the day in six figures – and both were sat at Ware’s table.

However, they need not have worried as one of the WSOP’s last big buy-ins attracted just one fewer competitor than last year – and in the process again exceeded all expectations following the hammering of online poker in the USA during the events of ‘Black Friday’ back in April.

Miami’s Robert Mizrachi isn’t too far back with 75,400 and could well produce a stellar second-day performance to put pressure on the top 10, while short-stacked stars David Baker, Frank Kassela, Mickey Appleman and Mike Matusow should also not be ignored as almost anything can occur over the next two days of the event.