The final table of the UKIPT Marbella Main Event took a little less than 5½ hours to conclude, with Espinosa taking the trophy and €136,000 prize for Spain. 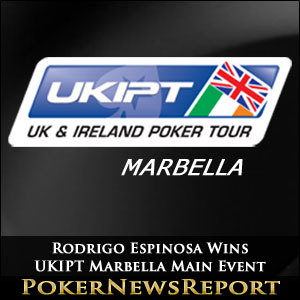 The final table of the UKIPT Marbella Main Event took a little less than 5½ hours to conclude, with Espinosa taking the trophy and €136,000 prize for Spain.

The PokerStars-sponsored UK and Ireland Poker Tour made its regular stop in Spain last week for the €1,000 buy-in ESPT/UKIPT Marbella Main Event, and 750 players joined the event over its two opening days to smash the €500,000 guarantee.

The top 111 players shared in the €720,000 prize pool after Gonzago Oliveira´s Kings burst the bubble against Paul Feber´s pocket Nines on Friday night; and, after a further day of action on Saturday, just eight players returned on Sunday to the H10 Casino in Puerto Banus to contest the final table.

There was plenty of potential for history to be made at the final table of the UKIPT Marbella Main Event – with chip leader Katja Svendsen looking to become the first female winner of a UKIPT Main Event, Jake Cody going for a Triple Crown of UKIPT victories, and Northern Ireland´s Gareth Hamilton looking to spin a £40.00 buy-in live qualifier into a six-figure payday.

Gareth Hamilton started the day in the best possible fashion – doubling up early A♦ K♠ > A♥ J♠ against Marcin Barwinski – but Jake Cody´s attempt to become the first player to win three UKIPT Main Event titles hit the rails in the first full level of play when he moved all-in with pocket Nines, but was eliminated by Rodrigo Espinosa´s pocket Aces.

Marcin Barwinski was to hit the rail in seventh place when his Q♣ J♦ failed to improve past Gareth Hamilton´s A♠ J♥, and Daniel Rodriguez was also eliminated during the early exchanges – his pair of pocket Eights running into Christian Bauer´s pocket Queens.

Rodrigo Espinosa´s elimination of Jake Cody had put the Spaniard at the top of the chip counts, and he used his advantage to turn the screw on his opponents. After taking 455,000 chips from Katja Svendsen with a Turned pair of Tens against Svendsen´s flopped pair of Nines, he then forced Christian Bauer out of a pot when Bauer had the better hand, and then caught a runner-runner flush to eliminate Gareth Hamilton in fifth place A♦ 8♦ > K♣ K♦.

Christian Bauer recovered some of the chips he had lost to Espinosa when busting Javier Elorza in fourth place A♦ K♦ > K♣ 7♥, but by now Rodrigo Espinosa was in overdrive, and the Spaniard took an 11,525,000 -v- 3,360,000 chip advantage into the heads-up against Bauer after eliminating Katja Svendsen in third place K♦ K♥ > 6♦ 8♦.

The heads-up lasted just five hands – the concluding hand coming when the two players got into a raising war following the flop of 9♠ K♠ 6♥. Rodrigo Espinosa eventually put Christian Bauer all-in and the cards were on their backs:

Bauer was a 74% favourite to double up, until the 7♣ was dealt on the Turn – giving Espinosa two pairs. The 2♦ bricked for Bauer on the River, and Rodrigo Espinosa had won the UKIPT Marbella Main Event for €136,000.