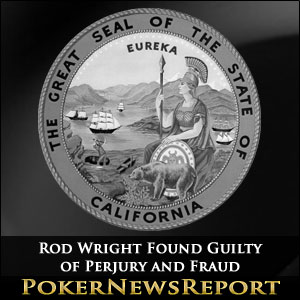 The allegations stemmed from Wright living in a home in Baldwin Hills, which is located outside of the Inglewood district he represents. California law requires senators to reside in their district.

Testimony from Baldwin Hills neighbors, as well as evidence such as luxury automobiles and closets full of clothes, convinced the jury of three men and nine women that Wright made his home there. He does own a house in his district of Inglewood and rented out a room in the home to a tenant. But that renter testified that Wright was not frequently seen.

Wright could get eight years in prison when he is sentenced on March 12. He pled not guilty and said that it was never his intention to deceive. But the jurors took less than two days of deliberation to convict Wright of all charges levied against him that included five counts of voting fraudulently, two perjury counts, and filing a false declaration of candidacy. He is currently free on $45,000 bond and his attorney indicated that the guilty verdicts will be appealed.

Wright had proposed SB 1463 and SB 51, both aimed at regulating online poker. Neither bill was able to gain enough support due to lack of cooperation among the state’s gaming interests. California cardrooms, Indian tribes and racetracks remained at odds during each proposal, with tribes also failing to find common ground among themselves.

Wright retains his Senate seat for the moment, as the California Constitution calls for a two-thirds majority vote of his fellow senators in order for expulsion from the legislature to be mandated, the L.A. Times reported. Whether Wright will choose to resign or hope to remain in office while his appeal meanders through the court is unknown.

Senator Darrell Steinberg, who co-sponsored SB 1463 with Wright in February 2012, expressed his dismay at the verdict and told reporters that many of Wright’s colleagues hold him “in high regard.” Steinberg added that he would consult with fellow lawmakers and attorneys to determine the next course of action.

How the guilty verdicts affect the possibility of online poker legalization in California is not fully known at this time. Recent reports have indicated that it may be exceedingly difficult for legislators to find approval for online poker this year due to upcoming elections.

California is the most populous state in the nation and the enactment of an online poker bill could go a long way in prompting other states to follow suit. Past bills have proposed to restrict legalized Internet poker to an intrastate format, but even such approval could sway other states who may be considering regulations of their own.