Rocco Palumbo has become just the sixth Italian to get his hands on a gold bracelet after winning event #44 at the World Series of Poker (WSOP) in Las Vegas. 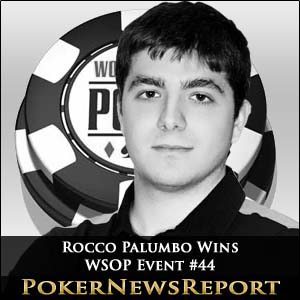 Rocco Palumbo has become just the sixth Italian to get his hands on a gold bracelet after winning event #44 at the World Series of Poker (WSOP) in Las Vegas.

The 23-year-old poker pro joins Salerno’s Jeff Lisandro, Milan’s Max Pescatori, Dario Alioto, of Palermo, Rome’s Dario Minieri and fellow Genoa native Valter Farina – who was the nation’s first WSOP winner back in 1995 – in what is a fairly exclusive club after picking up the $464,464 top prize for taking down the $1,000 buy-in No-Limit Hold’em tournament.

Palumbo returned for Day 3 alongside 15 other players who had survived from the original field of 2,949 to battle it out for the bracelet, ultimately defeating North Carolina’s Nelson Robinson in a heads-up clash that left the American runner-up with $288,448.

Heads-up play started with Palumbo holding a small chip lead – 4,647,000 to 4,200,000 – over Robinson, but increased his advantage swiftly by upping his aggression to chip away at his opponent’s dwindling stack that was now just above the one million mark.

But the American – who finished 33rd in last year’s main event – was willing to play his short stack and doubled-up twice, before finally succumbing not long after returning from a dinner break following something of a pre-flop raising war.

The tournament’s final hand started with Robinson opening on the button for 120,000, with big blind Palumbo then asking for a count, before three-betting to 300,000. Robinson replied by four-betting all-in, eliciting a shrug from Palumbo as he made the call.

Palumbo tabled A♦ 9♦ to dominate Robinson’s K♠ 6♠. The underdog needed help, but the 4♥ A♥ J♠ flop only succeeded in giving Palumbo top pair. The 4♣ turn changed little, while the K♥ arrived on the river to see Palumbo score the event’s final knockout with a higher two pair.

Washington’s State’s Darren Rabinowitz exited in 10th place for $26,727 not long after the remaining players had moved to the main feature table, when his K♣ K♦ lost out to the A♠ K♥ of Kevin Elia after the Maryland player paired his ace on the 5♦ 7♥ 8♥ A♣ Q♠ board.

David Forster Out in Ninth

Ninth place and $34,503 at the official final table went to California’s David Forster following a pre-flop raising clash against Palumbo. Forster, with A♥ K♠, called Palumbo’s four-bet all-in to find himself crushed by the eventual champion’s A♠ A♣.

Patrick Karschamroon, of Los Angeles, hit the rail in eighth place for $45,040 after moving all-in pre-flop with 8♠ 8♦, only to be met by Q♥ Q♠ of Jason Everett. The North Carolina player – who actually made a heart flush on the river – sent Karschamroon crashing out after the latter failed to improve his starting hand.

The last surviving woman, Germany’s Anke Berner, exited in seventh spot for $59,478 when her all-in move while holding K♥ Q♠ was scuppered by the A♠ K♠ of Illinois’ Niel Mittelman.

Short stack Elia fell in sixth place for $79,464 when he pushed all-in from the big blind after seeing a Q♣ 9♣ 7♣ flop following Palumbo’s pre-flop raise. The Italian snap-called to show K♣ Q♥ and eliminate Elia when the board failed to help him.

Everett was next to leave the final table in fifth for $107,411 when his A♦ 7♣ ran into Robinson’s ace-ten pre-flop. All-in, Everett was way behind and didn’t receive any help on the board.

Mittelman hit the rail in fourth for $146,931 following another pre-flop raising encounter. Mittelman found himself all-in holding A♦ Q♥ against the 8♣ 8♦ of Robinson. The board came 3♥ J♣ J♦ 9♣ 5♦ to send Mittelman home.

Start-of-day chip leader Thomas Conway had stayed quiet for most of the final table, but also exited without making the heads-up when calling Palumbo’s all-in shove. Illinois’ Conway showed K♣ 10♦, while Palumbo tabled the A♦ 7♥. Both players had a diamond flush by the turn on a Q♦ 5♦ 2♦ 3♦ Q♠ board, but Palumbo’s ace ensured Conway hit the rail in third for $203,437.