Andrew Robl, the only player to re-enter the $100,000 buy-in Challenge after busting on Day 1, took full advantage of his second chance to win AU$1 million. 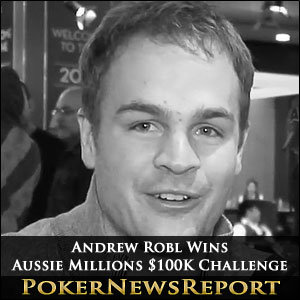 Andrew Robl, the only player to re-enter the $100,000 buy-in Challenge after busting on Day 1, took full advantage of his second chance to win AU$1 million.

Just seven players from the original twenty-one entries sat down to battle out the conclusion of the Aussie Millions $100K Challenge after the dual elimination of Chris Lee (A♥ K♠) and Winifred Yu (6♠ 6♥) in the last hand on Sunday night had enabled Igor Kurganov (J♣ J♠) to leap into second place in the tournament behind Japanese businessman and long-time chip leader Masa Kagawa.

A Brutal Start Reduces the Field to Four

Despite the fact that only four of the remaining seven players would cash in the event, there was no hanging about by the short stacks. Within 20 minutes Andrew Robl had sent Tobias Reinkemeier to the rail after winning a A♠ Q♥ > K♣ Q♣ race and Masa Kagawa chipped up to 900,000 when busting Vanessa Selbst in sixth (Q♠ J♣ > 9♠ 8♦ – top pair beating middle pair).

Niklas Heinecker (10♣ 9♣) was the inevitable bubble boy after getting all his chips in against Masa Kagawa (A♦ Q♠) on a flop of K♦ J♠ 8♠. Unfortunately neither a Seven, Nine or Queen appeared on the turn or river, and the player who had started the Day 2 of the Aussie Millions $100K Challenge desperately short of chips was eliminated in fifth.

Shak Booms and Tilts and Busts

After chipping up with a Club Flush against Igor Kurganov, Dan Shak took the chip lead in the Aussie Millions $100K Challenge when flopping the nuts straight against Masa Kagawa and doubling up to 1.056 million chips. However, his demise was soon to come – courtesy of Andrew Robl, a Lucky 7 and two bad calls.

In the very next hand Shak miscalculated how many chips Igor Kurganov had behind when calling Kurganov´s Q♠ Q♥ shove. Kurganov went on to make a set and cripple Dan Shak, who then got the last of his chips in the middle with J♦ 10♦ on a flop of K♦ 9♣ 3♣ only to see Andrew Robl roll over K♠ 5♠ for top pair. Dan Shak out in fourth.

Masa Kagawa had been reduced to little more than an onlooker since having his chip stack halved by Dan Shak – a chip stack that was now being gradually eroded by Andrew Robl´s aggressive river betting. Robl was ultimately to be the player who sent Kagawa to the rail – but in the most unfortunate of circumstances for the Japanese businessman.

With a chip advantage of 1.9 million to 300,000 in favour of Andrew Robl, the heads-up did not last long. Igor Kurganov managed one double up in a A♠ K♦ > A♥ 9♣ race, and got to within half a million chips of the leader when forcing Robl out of a 200,000 chip pot. However, his game was over when the turn card again proved to be significant for Robl in a pivotal hand.

The board (9♣ 4♣ 2♥ / 3♦) had reached the turn when Andrew Robl (A♠ 5♣) bet 60,000 chips and Kurganov (4♦ 3♠) raised him to 190,000. Robl – who had made a wheel straight – then bet all-in and was called by Kurganov, who needed a Three or Four to improve his two pair. Unfortunately the Q♠ on the river was of no help and Andrew Robl had taken down the Aussie Millions $100K challenge after being the only player to fire a second bullet and re-enter the tournament.