Robin Kazemieh won the Players Poker Championship Main Event in Aruba this morning in an unusual climax to the tournament in which no deciding hand was played. 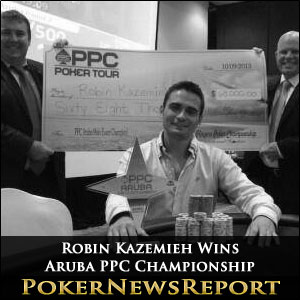 Robin Kazemieh won the Players Poker Championship Main Event in Aruba this morning in an unusual climax to the tournament in which no deciding hand was played.

It is pretty warm in Aruba right now. Night time temperatures do not fall below 28ºC (82ºF in old money) and humidity is a fairly constant 75 percent. However, there is nobody hotter in Aruba right now than German poker player Robin Kazemieh, who added victory in the PPC Aruba Main Event to a second place finish in the first PPC Aruba side event last weekend, following on from victory in the 6-Max side event at the FTP Montreal Poker Festival last week.

Kazemieh was also a warm favourite to take down the Players poker Championship Main Event when the nine remaining players took their seats at the Radisson Aruba Resort – having amassed a substantial chip advantage during the penultimate day of the tournament. However, in order to claim victory in the event, Kazemieh would have to overcome WSOP bracelet winner Joe Ebanks and last year´s winner of the PPC Aruba Main Event – Joe Serock.

Andy Seth enjoyed the best possible start to the Aruba PPC Final Table when shoving all in on the first hand with Q♦ Q♣ and getting a call from RJ Franklin (A♥ K♥). Seth´s Queens held to double-up his chip stack, but there was no such good luck for Stephen Sindler in the second hand after he got all-in with K♦ Q♦ and received a call from David Tuthill (A♠ Q♣). The A♥ on the flop ensured there was no bad beat for Tuthill, and Sindler was bust from the Final Table in ninth.

Tuthill into the Lead

Levels 19 and 20 saw the ascendency of David Tuthill from “man at risk” when the final table got underway to chip leader by the time Level 20 had drawn to a close. A flopped pair of Kings and three streets of value saw Tuthill take 95,000 chips from Robin Kazemieh, before he eliminated Ryan Franklin in eighth 10♥ 10♦ > 7♦ 7♥ to take a narrow lead from Kazemieh at the top of the chip counts.

Andy Seth was also very active during the two levels and at one point had moved into third place after doubling up against RJ Sullivan Q♦ Q♥ > A♣ K♦, but folds in big pots three times under pressure from Robin Kazemieh and once from RJ Sullivan saw him slide back down the leaderboard with only 160,000 chips by the time Level 21 got underway.

Four Eliminations in One Level

Savill was quickly followed to the cashier´s desk by Andy Seth, who got all his chips into the middle with 5♥ 5♦ and received a call from Joe Ebanks (K♠ Q♠). The K♦ on the Turn sealed Seth´s fate and, after firing four bullets in the $2,500 buy-in tournament, he left the tournament in sixth to pick up a $1,000 profit.

David Tuthill´s dramatic fall from the top of the leaderboard was almost as impressive as his rise. Having been overtaken at the top of the chip counts by Kazemieh (following Kazemieh´s elimination of Sterling Savill above), Tuthill five-bet shoved his J♣ J♠ into the K♥ K♣ of Robin Kazemieh and was eliminated in fifth place.

The final table of the PPC Aruba Main Event was then reduced to three after RJ Sullivan doubled-up Joe Serock J♣ J♥ > 5♣ 5♠, and then got the last of his chips into the middle with K♣ 2♠ against the A♦ 7♣ of Robin Kazemieh. Both players missed the board of 6♥ 4♣ 4♠ / J♦ / 10♥, and Sullivan was out of the tournament in fourth place – Kazemieh now having more than half of the chips in play.

With blinds of 5,000/10,000 (ante 1,000) as the game entered Level 22, the three players traded three-bets and folds for much of the next hour until a pre-flop raise by Joe Serock was answered by Joe Ebanks with a three-bet shove. Serock snap-called and tabled A♠ K♦, which was way ahead of Joe Ebanks´ K♣ 10♣ until the 10♠ was the first card out on the flop. Ebanks had to survive a sweat on a gutshot straight, but eventually doubled-up when the K♠ on the River gave him two pairs.

Ebanks then took the chip lead for the first time in the PPC Aruba Main Event after winning a major hand against Robin Kazemieh. One the flop of J♠ 5♥ 2♠, Kazemieh bet 45,000 chips, to which Ebanks responded by raising to 100,000. Kazemieh called and both players saw the 5♣ on the Turn, after which Kazemieh check-shoved following Ebanks´ 250,000 chip bet. Ebanks snap-called with K♥ K♣ to hold the lead over Kazemieh´s J♦ 10♣, and his hand held on to win after the 3♥ on the River.

… Before Kazemieh Claims it Back

Joe Ebanks´ lead at the head of the chip counts lasted less than one level. A(nother) double-up by Joe Serock (A♠ J♣ > 7♦ 7♠ of Joe Ebanks) brought the chips counts closer together, but then Robin Kazemieh found A♣ A♠ to win a half million chip pot from Serock and chip back up into the tournament lead.

The start of the heads-up was one-way traffic. The aggression that Robin Kazemieh had shown in the two previous days of action was again evident as he reduced Joe Ebanks to less than 400,000 chips. However, Ebanks was able to double up 2♥ 2♠ > 10♦ 10♣ due to rivering a set of Deuces, after which the two players decided to talk about a deal.

Despite still having an almost 2:1 chip advantage, Kazemieh agreed to a deal which would see him collect the PPC Aruba title and $59,139 in prize money without playing another hand. Ebanks took $50,861 for finishing second, and the full final table payments finished off like this:-