Romanello might have picked up 2 crowns at the EPT Awards ceremony – but he couldn’t bag the big one, as Andrej Vinklarek collected the Player of the Year title. 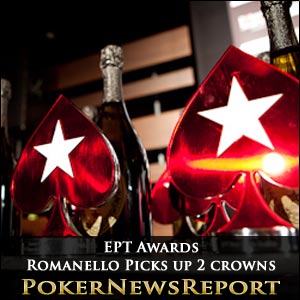 Welshman Roberto Romanello might have picked up two crowns at the European Poker Tour (EPT) Awards ceremony in Monte Carlo – but he couldn’t bag the big one, as the Czech Republic’s Andrej Vinklarek collected the Player of the Year title.

Roberto Romanello bagged the EPT Season Eight Achievement of the Year prize – which is voted on by the poker media – and the Players’ Choice awards to emphasise his popularity among his peers and commentators alike.

However, the Italian-born Welshman, who received a full package to the first event of Season Nine in Barcelona as his prize, missed out on an incredible treble when Vinklarek was announced as the Player of the Year by EPT director Edgar Stuchly – while also beating out Team PokerStars Pros Jonathan Duhamel and Eugene Katchalov, as well as Martin Finger, Steve O’Dwyer and Nick Yunis to the award.

Of course, Vinklarek – who notched an astounding 11 cashes during Season Eight – made his way up to the stage to accept his award, pose for the gathered media and allow some photographs to be shot, before EPT Season Eight came to a close at Cafe Llorca in Monaco’s Grimaldi Forum.

Earlier in the evening, host and poker commentator Joe Stapleton made a dramatic entrance on to the stage – with beer in hand and an unshaved face – to poker some gentle fun at numerous big-name pros, including four-time World Series of Poker (WSOP) bracelet winner Daniel Negreanu, who had just missed out on winning the EPT Grand Final €25,000 High Roller at the nearby Monte Carlo Bay Hotel & Resort.

Daniel Negreanu Laughs Through the Pain

Stapleton asked: What do Daniel Negreanu and an emergency room have in common? Neither of them ever closes.

While certain pros might take offence at such a ribbing, the Canadian broke into laughter – even if he missed out on picking up an extra $635,570 after being defeated by Germany’s Igor Kurganov in their heads-up clash. Still, ‘Kid Poker’ was obviously still happy to have earned $790,304 for his runner-up finish.

The 37-year-old from Toronto certainly had a great time, sitting alongside fellow Team PokerStars Pro Liv Boeree in the VIP section, although he also took time out to pose for photographs and chat with many of his fans.

Stapleton did, however, finally get to the awards, first handing Romanello his two trophies, before calling Houston’s Melanie Weisner – who is a Lock Poker Pro Elite member – up to receive her Heads-Up Player of the Year prize after she saw off challenges from Germany duo Finger and David, as well as Chile’s Yunis.

More hilarity ensued when Belgian Pierre Neuville sauntered on to the stage sporting an all-white combo of shirt, shoes and suit, before asking: What did I win?

Feigning ignorance, regular PokerStars qualifier Neuville was, in fact, well aware that he had picked up the Online Qualifier of the Year by besting the unlucky Finger – who was nominated in three categories without a win – as well as Irishman Mick Graydon, States star Kevin MacPhee and English pro Zimnan Ziyard.

The final award went to Lebanon in the Country of the Year, with Bulgaria, Denmark, France, Ireland, Russia and Spain missing out – before the Player of the Year award went to Vinklarek to end the proceedings.

Not that the awards ceremony guests were in any mood to halt their partying as many continued celebrating well into the early hours of the following morning when taking full advantage of the free bar on offer at Cafe Llorca. Lucky lot!

Still, it all begins again soon enough with the revamped eight-stop Season Nine kicking off at the Casino de Barcelona for 11 days of action from August 15 to 25. No doubt many of the awards winners will be signing up for the seven-day €5,000+€300 buy-in No-Limit Hold’em main event as everyone starts with a clean slate – and the chance of partying at the end-of-season awards ceremony in Monaco next year.

Additionally, Barcelona will debut a televised €50,000 High Roller tournament that will break the record as the largest buy-in event ever staged in Spain, so expect numerous superstars to appear in that, too.

EPT Achievement of the Year (voted for by poker media)

Player of the Year

Omaha Player of the Year

Mixed Game Player of the Year

Heads-Up Player of the Year

Online Qualifier of the Year