There was a sensational climax to the PokerStars Canada Cup when Robert Notkin eliminated three players in one hand to win the title and CA$366,660 first prize. 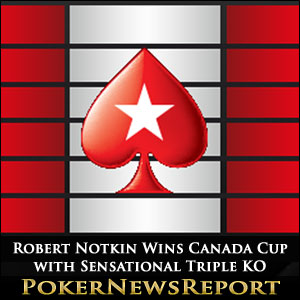 There was a sensational climax to the PokerStars Canada Cup when Robert Notkin eliminated three players in one hand to win the title and CA$366,660 first prize.

The final table of the CA$2million guaranteed PokerStars Canada Cup was expected to be fairly tense due to the relative proximity of the chips stacks when play began – and relatively boring due to the eliminations of Jonathan Duhamel, Marc Andre Ladouceur and Antonio Esfandiari during yesterday´s Day 4.

Just four big blinds separated the top three players on the Canada Cup leaderboard, and even the shortest stacked player – James Armstrong – had a decent stack to play with as the game resumed just a few hands into Level 26 with blinds of 20,000/40,000 and a 5,000 chip ante.

Expectations Blown Away in First Level

All the expectations that the Canada Cup final table would be tense and dull – and that James Armstrong would not feel the need to shove on the first occasion he had the button – were blown away in the fourth hand of play when James Armstrong opened from the button with 5♥ 5♠. Francois Goulet in the small blind three-bet to 110,000 chips with K♣ K♥, and Armstrong made the call.

The flop of 3♥ K♦ 5♣ meant that both players had made a set, but Goulet simply made a continuation bet of 110,000 chips which Armstrong flat-called. Goulet was even more reluctant to press for the kill after the Turn of 10♥ and checked through to Armstrong. Armstrong bet 125,000 chips, which Goulet raised to 275,000 chips, and to which Armstrong responded by shoving all-in. Goulet snap-called, and with no one-outer on the River to save Armstrong, he was eliminated from the Canada Cup in ninth place.

With Francois Goulet chipping up after the elimination of James Armstrong, Ankush Mandavia was now the shortest stacked player; but Mandavia doubled-up against Justin Miller K♠ K♦ > 7♥ 7♠ when both players flopped a set, returning Goulet to the bottom of the chip counts. Goulet bust in eighth place when his A♠ Q♥ failed to improve past Thiago Nishijima´s A♣ K♦, but thereafter the chip leader´s chip stack suddenly went into a rapid decline

Vincent Jacques (K♠ K♣) took over at the top of the Canada Cup leaderboard when Nishijima (Q♠ 10♣) missed his open-ended straight draw and, after Robert Notkin had forced Nishijima off of a million chip pot, the overnight chip leader´s collapse was completed by Notkin A♠ J♦ > K♠ 10♠ when both players completely missed the board – Notkin now sharing the chip lead with Vincent Jacques (+/- 5 million chips) with the remaining players having between 1.5 million and 2 million chips with blinds now at 40,000/80,000 (ante 10,000).

Notkin Gains Advantage as Mandavia and Chamas are Eliminated

Despite the substantial pay jumps between sixth place and first place, there was no hanging around at the Final Table of the Canada Cup. Ankush Mandavia departed in sixth place when he ran his A♥ 9♠ into Justin Miller´s 9♦ 9♥, and Robert Notkin put some space between himself and the rest of the field at the top of the leaderboard when taking a 2 million chip pot from Rayan Chamas A♣ K♠ > Q♠ 10♠ on a King-high board.

Chamas managed to stick around for another forty-five minutes after having his chip stack crushed by Notkin, but was eventually eliminated in fifth place when he ran his K♣ J♥ into Robert Notkin´s A♦ Q♦ and failed to connect with the board. A double-up by Ryan Rivers against Vincent Jacques (A♦ K♥ > A♣ 10♣) and victory in a big pot against Justin Miller left the respective chip counts as follows going into the final hand:

Whereas it has sometimes been the case that the remaining players at a final table shove all-in every hand until a winner is determined, the scenario preceding the conclusion of the Canada Cup was very different. Four-handed play had been going on for almost two hours – with no talk of a deal and still early in the evening – when Robert Notkin limped into the pre-flop betting with K♣ K♥.

Justin Miller shoved all-in with K♠ Q♥, to which Vincent Jacques responded by trying to isolate him with A♥ 10♦. Ryan Rivers made the call with 8♣ 8♥ and Notkin covered all the bets with his pocket Kings.

The board of 3♥ 7♦ J♠ / 7♥ / 5♣ produced absolutely nothing for Miller, Jacques or Rivers, and Robert Notkin had become the first ever winner of the PokerStars Canada Cup – with the second to fourth places determined by the relative chip stacks of the other players going into the final hand.