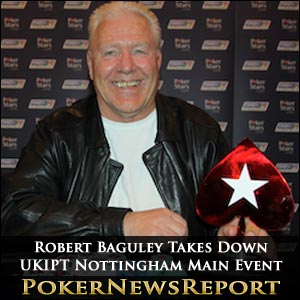 The 60-year-old retired landlord emerged victorious at the Dusk Till Dawn club after battling back from a massive chip deficit to defeat Iqbal Ahmed – who had started the last day with a very healthy advantage over his seven final-table rivals – in heads-up play that left the runner-up with £125,000 for his efforts.

While Ahmed will be disappointed not to have held on to his lead all the way to the end, he has, however, easily beaten his previous best cash when picking up $67,812 for finishing second in the €910 buy-in No-Limit Hold’em main event of the Estrellas Poker Tour Alicante back in May last year.

But Baguley’s victory is even more impressive as his previous best cash was for just $603 last April when he took seventh place in a £50 buy-in No-Limit Hold’em side event during the Monte Carlo tournament at Dusk Till Dawn.

However, it was Leicestershire’s Baguley who took the title once Ahmed had eliminated Pirie in third. Ahmed started the head-to-head clash with more than double his opponent’s chips – 16,425,000 to Baguley’s 7,685,000 – only for the latter to swiftly chip up.

In fact, Baguley took over as chip leader about 20 minutes into their encounter when he turned trip sevens against Ahmed when showing 9♠ 7♣ on a board that read Q♣ 4♠ 7♥ 7♦ K♣. Ahmed mucked his cards, but now found himself on nine million chips to Baguley’s 15 million.

The final hand arrived about 60 minutes later when Baguley opened for 450,000, only for Ahmed to shove all-in. Baguley made the call to show the dominating A♥ 10♦ while Ahmed tabled J♥ 7♠.

The 10♥ 4♠ 6♦ flop gave Baguley top pair, with the 6♠ turn leaving only a jack to save Ahmed’s tournament life. However, the K♣ on the river was not what he wanted to see and Baguley was crowned UKIPT Nottingham champion.

PokerStars player Ahmed had, of course, started the final day on 6,680,000 chips – way ahead of his nearest rival, 55-year-old Senior, who held 3,765,000. But it was the latter who surprisingly exited first on Day 4 in eighth place.

The chartered accountant from Buxton has become the short stack when, under the gun, he made a big raise of about 500,000. The action folded to Aberdeen’s Pirie in the big blind and he moved all-in, with Senior calling quickly.

The Scotsman tabled K♠ K♣ to dominate the Q♥ Q♣ of Senior. The flop came 5♦ 6♦ 10♠ to change nothing, while the 3♠ turn and 10♥ river confirmed Senior’s exit as Pirie moved up to five million in chips.

Just six players were left challenging for the title 20 minutes later when the short stacks of Jersey’s Cummings and 26-year-old Londoner Woodward clashed.

In the hijack seat, Cummings open shoved with K♠ J♥, only for Woodward to also move his whole stack into the middle. The action folded and Woodward showed K♠ K♦ to be in great shape for a near-double up.

The 8♠ K♣ 2♥ flop gave Woodward trip kings, while the A♥ turn and 10♦ river changed nothing as 26-year-old property developer Cummings hit the rail in seventh from his first UKIPT event.

However, Woodward did not hang about for too long, crashing out in sixth place when coming up against Pirie. But the damage had been done two hands earlier during the early stages of level 32 when the blinds were at 80,000/160,000 with a 20,000 ante.

Woodward raised to 375,000 and the action moved to small blind Ahmed, who moved all-in. Woodward gave it some thought, but then called to show J♥ J♦ to be ahead of Ahmed’s A♣ Q♥.

A few minutes later and Woodward was hitting the rail when 21-year-old casino dealer Pirie took the remainder of his chips.

McMahon, under the gun, open shoved for about 1.4 million, while Khodiyara – who was on the button – followed suit to also get his chips in. Big blind Ahmed asked for a count on both players’ stacks before calling to show Q♣ 7♥.

He was behind both his opponents as Khodiyara showed K♣ 9♣ and McMahon revealed A♠ 6♠. But the 7♠ 2♦ 6♥ flop changed that as Ahmed gained top pair.

The 7♣ turn gave Ahmed trips, while the Q♦ filled that up to a full house to send Khodiyara and McMahon to the rail as the hand winner moved into a dominating chip lead on approximately 12 million.

Just 10 minutes later, we had our final two as Ahmed disposed of Pirie in third place. Ahmed opened for 350,000, but then saw Pirie go over the top with an all-in move for approximately 3.8 million.

However, Ahmed called to show A♦ J♥ for a dominating pre-flop lead over the A♠ 7♣ of Pirie. The board ran out K♥ 9♠ Q♣ 2♥ A♣ to ensure that Ahmed’s jack came into play to separate the aces gained by both.

That left 29-year-old Ahmed with more than two-thirds of the chips in play, although he was unable to overcome the challenge of Dusk Till Dawn regular Baguley and was soon hitting the rail himself as runner-up.

The UKIPT now moves on to Ireland and Dublin’s CityWest Hotel from May 17 to 21, with the five-day festival featuring a €700+€70 buy-in main event that is capped at 1,000 entries.