Eric Rivkin recovered from being crippled at the beginning of an eventful final table to come back and take down Event #18 of the Borgata Poker Open. 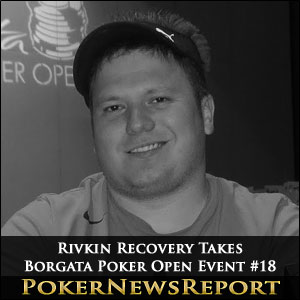 Eric Rivkin recovered from being crippled at the beginning of an eventful final table to come back and take down Event #18 of the Borgata Poker Open.

Event #18 of the Borgata Poker Open was a $350.00 + $50.00 NL Hold´em re-entry tournament, which saw 377 players contribute towards the $131,950 prize pool. Thirty-six players cashed in the event – the bubble being burst in dramatic style just after midnight, when the player at risk flung his chips across the table and stormed out of the casino after seeing that his opponent had flopped a straight against his pair of Nines.

It took a further three hours for the field of thirty-six to be reduced to the ten remaining players who took their seats just before 3.00am; with Sean Wallace having enjoyed a hot streak to head the tightly packed chip counts with 1.35 million chips (average 755,500) and the blinds now at 15,000/30,000 (ante 4,000).

The final table of the Borgata Poker Open Event #18 was one of the most enthralling seen to date in the series. Five successful double-ups in the opening exchanges re-shaped the whole dimension of the event and started with Pedro Rios’ double-up with A♠ 8♣ over Eric Rivkin´s K♥ J♣. The pattern continued with Gurvinder Shergill doubling up Joseph Galazzo (A♠ 6♠ > pocket Fours), Shergill then doubling back up against Pete Zappulla (pocket Sixes > pocket Threes), Len Vizirov finding Aces to double up against Artur Zaikansky and Paul Stevens winning a race with pocket Eights against Pedro Rios´ A♠ 9♠.

At the end of the first level, the ten players went on a short break. However, only nine returned, as Pete Zappulla misheard the instructions to break and believed the players were taking a second dinner break (at 3.30am!). Consequently he was not around to see the elimination in tenth place of UK poker player Gurvinder Shergill, who moved all-in from the button with pocket Eights for his last 455,000 chips. Sean Wallace made the call with K♠ J♥ and a King on the flop seals Shergill´s fate.

Pete Zappulla returned to his seat after being absent for an hour and, out of frustration, shoved all his chips in – but got no callers. Eric Rivkin on the other hand got a valuable double up A-K > A-Q against Leonardo Palermo before shoving into Pedro Rios´ pre-flop raise and twice forcing big folds from Joseph Galazzo. With blinds now up to 30,000/60,000 (ante 5,000), Eric Rivkin was picking up some fairly valuable pots with his pre-flop aggression, and he was soon mounting a challenge at the top of the leaderboard.

The final table of the Borgata Poker Open #18 was reduced to eight when Leonardo Palmero moved all-in from the small blind with Q♦ 9♦ and was called by Pedro Rios (A♦ 3♠) sitting next to him in the Big Blind. The board ran 6♠ 6♣ 2♣ / 7♠ / K♥, and Rios´ Ace-high was good enough to take the pot. Paul Stevens was soon to join Palmero on the rail after his shove with A♥ K♥ was called by Len Vizirov´s A♣ J♣, and Vizirov caught a Jack on the flop, and Pete Zappulla´s attempt to recover the chips which were blinded off during his absence backfired when he pushed the last of his chips into the middle with K-5, and ran straight into Sean Wallace´s A-J – Wallace´s Ace pairing on the flop to end Zappulla´s participation in the event in seventh place.

Once the blinds had increased to 50,000/100,000 chips (ante 10,000 chips) the double-ups magically disappeared and the tournament was concluded quickly. Short stacked Artur Zaikansky thought he had found the right spot to get all-in with A♥ 7♥, and was leading the pre-flop race against Len Vizirov´s Q♠ J♠, but the Q♥ on the flop sent Zaikansky out of the tournament in sixth. Vizirov however was soon to follow, having been crushed by Eric Rivkin (K♠ Q♠ > 7♦ 7♣) and then moving all-in with the “Doyle” (10-2). Vizirov hit a deuce on the flop, but Sean Wallace (K-7) also paired his Seven to eliminate Vizirov in fifth.

The long-running duel between Eric Rivkin and Pedro Rios came to a sudden and dramatic end when Rios re-raised Rivkin´s opening bet of 200,000 to 630,000. Rivkin (pocket Kings) responded by announcing he was all in, which Rios (pocket Jacks) snap-called. The board blanked for both players, eliminating Rios and giving Rivkin a massive chip advantage going into three-handed play.

Three became one in just one hand. Eric Rivkin opened for 230,000 chips and Sean Wallace moved all-in for his last 135,000. Joe Galazzo moved over the top for 750,000 chips and Eric Rivkin announced that he was all in for just over 5 million chips. Galazzo quickly called for the last of his chips and the cards were on their backs:-

The board of J♥ 8♥ 4♣ / 8♦ / 5♥ missed everybody, and Eric Rivkin had performed a dual knockout (Wallace in third, Galazzo in second) to win Event #18 of the Borgata Poker Open.