Russian Rinat Bogdanov has taken down the €4,950 main event at the World Poker Tour (WPT) Venice Grand Prix in the world’s oldest casino for the biggest cash prize of his career. 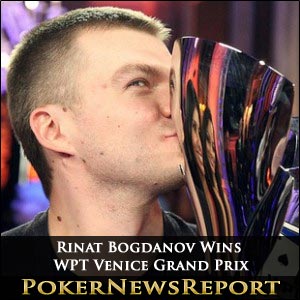 Russian Rinat Bogdanov has taken down the €4,950 main event at the World Poker Tour (WPT) Venice Grand Prix in the world’s oldest casino for the biggest cash prize of his career.

The financial trader picked up $302,065 for his success at the Casino di Venezia Ca Vendramin Calergi to easily surpass his previous biggest cash of $10,984 when finishing fourth in the $220 No-Limit Hold’em Rebuy event at last August’s Merit Cyprus Classic in Kyrenia.

Bogdonov’s prize from the five-day event also includes a $25,000 WPT World Championship seat at The Bellagio in Las Vegas come late May.

Having seen off four other final-table opponents, Bogdanov then overcame Italian Alessandro Longobardi in their heads-up clash to incredibly emerge victorious from his very first WPT tournament.

The exit of Dato left Longobardi and Bogdanov to fight it out for title, with the latter securing his crown after what was a rather short head-to head.

Having won a small pot from their first hand, the Russian then picked up Longobardi’s remaining chips on the very next hand when the blinds were at 40,000 and 80,000.

The 6♠ came on the river and the Russian check-called once more when Longobardi made a bet of 240,000.

Incredibly, the 4♠ arrived on the river to give Bogdanov a full house – and he craftily checked again to prompt a 300,000 bet from Longobardi.

The Russian then made his move by chucking in the remainder of his chips, leaving Longobardi to consider his cards and chip stack before he called with two pair, queens and fours.

The Italian was certainly shocked to see Bogdanov reveal his huge hand – and that was that for Longobardi, who rose from his seat to warmly shake the hand of the latest WPT champion.

However, Bogdanov was an immediate danger to them both as he held 907,000 chips on the final day of the main event.

Another Italian, Trebbi, was next out in fifth place for $56,134 when he moved all-in once too often at the final table during level 25 to see his 10♥ 7♥ dominated by the J♦ J♥ held by opponent Longobardi.

Longobardi showed his pocket jacks ahead of a Q♠ 10♣ 2♣ flop that gave Trebbi some hope with his pair of tens. However, following a nothing card of 3♠, Trebbi was gone when the 8♦ arrived on the river.

Eventual champion Bogdanov had been fairly quiet early in the final table, but then doubled-up through Dato in what was a hugely significant hand.

The Italian thought about his next move for a short while before choosing to make the call with 2♦ 2♣. Bogdanov, who was covered by Dato, showed Q♣ 9♦ to be behind, although not that far.

The flop of A♥ 5♦ 3♠ kept Dato in front, while the 3♣ changed nothing. However, Bogdanov stayed in the tournament when the Q♥ arrived on the river to take his stack to 1,065,000 while at the same time chopping Dato down to 1,470,000, although he still had the edge on second-placed Longobardi.

Immediately after that explosive hand, short stack Ravnsbaek, of Aarhus, was hitting the rail in fourth place when eliminated by Bogdanov.

The flop revealed A♠ 7♠ 6♦ to keep the Russian ahead, while the Q♥ on the turn and 8♠ on the river handed Bogdanov an ace-high flush that took him on to 1.8 million chips and sent Ravnsbaek crashing out.

Longobardi took over as chip leader when Dato made some poor decisions with three-bets, before Bogdanov finally sent Dato to the rail in third place during level 29, when the blinds were at 40,000 and 80,000, with a 10,000 ante.

Dato, with K♠ 4♦, was the short stack when he moved all-in pre-flop and was called by Bogdanov, who revealed the dominating A♣ K♦.

Dato required an incredibly favourable flop to stay in contention for the top prize, but the A♥ Q♥ 8♠ was not it.

Of course, the Russian won their heads-up encounter in this leg of season 10 to join the likes of Gus Hansen and Phil Ivey as a WPT champion.

Lionel Tran was the unfortunate money bubble boy on Day 3, just falling short in 19th – behind Italy’s Gianluca Speranza, who picked up $9,497 for his 18th-place finish – while German Marko Neumann was sent to the rail in 13th for €8,540 and Norwegian Marcel Bjerkmann exited in 12th for €9,855.

Tony G and Mike Sexton Out on Day 2