Jean Francois Rigollet has emerged as the narrow leader of the WPT Amneville Main Event after two Day 1s. 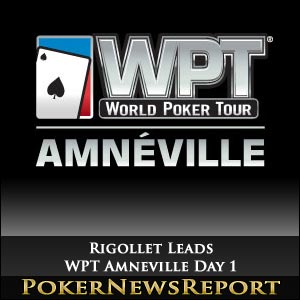 Jean Francois Rigollet has emerged as the narrow leader of the WPT Amneville Main Event after two Day 1s.

The Frenchman, whose best previous performances were a final table appearance in the 2009 Barriere Poker Tour and a second place finish in this year´s Wynn Classic, holds a two big blind advantage over compatriot Nicolas Babel with Riad Mounir and Thibaut Durand completing a French 1-2-3-4 at the top of the leaderboard.

The Field Not as Strong as Expected

Organiser´s hopes of a record-breaking entry for the €3,500 Main Event were dashed when only 379 players made the trip to the North Eastern town of Amneville on the Luxembourg border. Following the successes of the WPT France and WSOPE in Cannes, it was anticipated that a third major tournament in France within a short period of time would enable numbers to exceed last year´s 542 entries. However, the Day 1A entry of 176 displayed an indifference to the event and was only slightly bettered on Day 1B.

Some Stars Make the Trip

Among those that did voyage over to Amneville were Liv Boeree and boyfriend Kevin MacPhee – Liv managing to survive into Day 2 while Kevin was seen in the Dinosaur Park with Bertrand “ElKy” Grospellier after both were busted out of the tournament.  UK poker players Dan Carter, John Eames and Matt Frankland drove across France to attend the event, but Carter and Eames will be cleaning the windows and checking the oil for the return trip, as only Matt Frankland made it into the 218 players who will compete in Day 2.

Even though the WPT Amneville Main Event was poorly attended, the prize fund still managed to exceed one million Euros. The winner of the tournament will collect €310,633 and a $25,500 WPT Bellagio Package for the season finale in Las Vegas in December. The second placed player will receive €170,365 and a €10,000 package for next season´s WPT Paris, while the third will also enjoy a six-figure payday of €113,580. In total 36 places will be paid a minimum of €8,518 – but we will not know who the lucky winners are until Friday night.

Chip Counts at the End of Day 1

The combined chip counts from both Day 1s reveal that our chip leaders have slightly more than three times the average stack (52,155) and that the French actually have a chance of winning one of their own events this year. When play resumes at the Seven Casino d´Amneville, blinds will be 400/800 with a 100 chip ante, and eight further one hour levels are scheduled to be played.