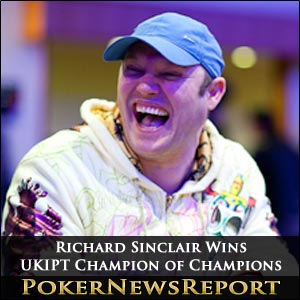 The Armadale-based player left with hotel accommodation and buy-ins for all of next year’s third season of the UKIPT after winning his place at the sit and go event by taking down June’s Newcastle tournament.

An online specialist, Sinclair spoke to PokerStars following his Newcastle victory, stating that he did not travel to many events as the costs were too high. He won’t have to concern himself with that next year, though. Good man.

A delighted Sinclair again chatted with PokerStars following his victory, saying: “This means I’m freerolling season three of the UKIPT, which is great.

“Cutting down on expenses and hotel costs is huge. I’m really looking forward to defending my title in Newcastle and coming back to Dusk Till Dawn.”

Once those six were eliminated, Sinclair then found himself confronted by double UKIPT champion Nick Abou Risk in a heads-up clash.

However, the Scot emerged victorious after his A♠ 9♠ beat out Canadian Abou Risk’s K♣ 6♦.

The A♦ arrived on the turn to leave the Canadian drawing dead. The 6♦ on the river mean nothing and Sinclair was champion.

Qualifying for the first stop on next year’s tour in Galway (from February to 16-20) at PokerStars.