Richard Pearson Stars on Day 1A of GukPT Blackpool

Leg 11 of the Grosvenor UK Poker Tour got underway yesterday at the G Casino in Blackpool and, after nine levels of play, Richard Pearson leads the Main Event. 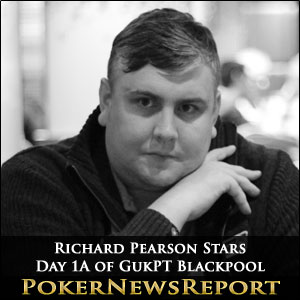 Leg 11 of the Grosvenor UK Poker Tour got underway yesterday at the G Casino in Blackpool and, after nine levels of play, Richard Pearson leads the Main Event.

The £200,000 guaranteed Blackpool GukPT Main Event got off to a good start yesterday, with 71 players either qualifying online or ponying up the £1,060 buy-in to take part in the penultimate Main Event of this year´s tour.

Some big hitters rolled into town to compete in the event, but it was GukPT regular Richard Pearson who stole the headlines at the end of the night, after a late surge of decent pots put him at the top of the leaderboard.

Only twenty-eight players survived Day 1A of the GukPT Blackpool Main Event but, with re-entries available until the end of Level 6 on Day 1B, many of the players that bust out yesterday are expected to fire a second bullet in pursuit of the £30,000+ first prize.

There were some bad luck stories throughout the day as there always seems to be in GukPT tournaments. John Eames was the first player to bust from the GukPT Blackpool Main Event when he moved all-in with Q♥ Q♠ and ran straight into Richard Kellet´s K♥ K♦. Eames fired a second bullet almost immediately, but only managed to finish the night with 16,000 chips – in 27th place of the twenty-eight players that remain.

The GukPT Blackpool Main Event of 2008 was the first live poker tournament that Jake Cody ever played in, and yesterday he returned to the scene of his first ever out-of-the-money finish. Unfortunately for Cody, he was busted out 6♥ 3♥ > A♦ A♥ on a three-Heart flop, with no Heart on the Turn or River to gain the better Flush. Cody tweeted almost immediately that he would be back for a second attempt today.

The winner of last year´s GukPT Blackpool Main Event Simon Deadman was also eliminated in less-than-conventional circumstances. Deadman was crippled in a hand he let go against Majin Khan, after he had flopped a straight and Khan moved all-in when the board paired on the Turn. He then moved all-in with A♠ 10♠ against the pocket Eights of Kevin Houghton, but could not find the Ace or Ten that he needed to double up and was sent to the rail during the last level of the night.

Big Slick Might Have Been Good Enough for Ryan Riess …

An Ace-King combination of pocket cards (known as “Big Slick”) was the hand that won Ryan Riess $8 million in the recently concluded WSOP Main Event, but for some players at the GukPT Blackpool, being dealt Ace-King signalled their exit from the Main Event.

John Haigh delivered a dual KO to Dave Birtles (A♦ K♣) and Mark White (A♥ K♦) when his pocket Tens held to bust both players out of the GukPT Blackpool Main Event, and Tom Hall left the tournament after his A♠ K♣ ran into the 10♠ 10♣ of Richard Pearson and, despite pairing his King on the flop, Hall watched in disbelief as Pearson went on to make Quad Tens.

Joining Pearson and Haigh at the top of the leaderboard are Syed Zaidi and John Hall (not to be confused with Tom Hall) – who won one of the most incredible hands seen all day. Hall (6♦ 6♠) had bet 8,000 chips on the flop of 6♥ 7♠ 8♠ and James Browning (J♠ 9♠) responded by shoving the last of his 30,000 chips. John Hall made the call and saw Browning completed his flush on the Turn (3♠), but the 6♣ on the River gave Hall Quad Sixes and Browning was out of the event.

End of Day 1A Chip Counts