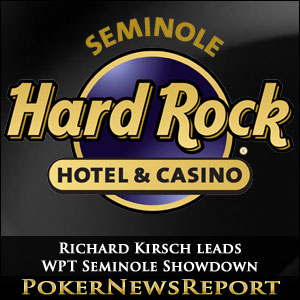 From the record-breaking entry for a WPT Main Event, 673 players survived the three opening flights and took their seats yesterday at the Hard Rock Hotel & Casino in Seminole, Florida, to compete in another ten 60-minute levels of action – during which the money bubble was expected to burst.

One Million Dollars for the Winner – 170 to Get Paid

As play resumed on Day 2 of the WPT Seminole Hard Rock Poker Showdown, the massive prize pool and the distribution of the prizes were announced. 170 players would share in the $5,763,150 prize pool – a min-cash being worth $7,093 – with the six players making it to Wednesday´s final table being assured of $247,954, and the winner collecting a massive $1,081,184 first prize which includes a seat at the WPT World Championship on April 21st.

As play progressed, it became apparent that something special would be needed for somebody to claim the $1million+ first prize. Frank Russo became the early chip leader when making a full house to bust WSOP Main Event Champion Ryan Reiss, but he was soon leap-frogged by Tony March – who bust Mike Sexton´s flopped Full House with Quad Tens.

As the dinner break approached, a rash of well-known names left the WPT Seminole Hard Rock Poker Showdown including Jennifer Tilly, Matt Berkeley, Jason Mercier and WPT Jacksonville winner Jarred Jaffee, who was bust by Lily Kiletto. Kiletto then had the misfortune of running Ace-King into Quads before losing the last of her stack to Ryan Eriquezzo´s rivered straight.

Coming out of the dinner break (Level 17 – blinds 2,500/5,000 – ante 500), just 238 players remained, but the pace of the knockouts remained relentless. Siva Ganta moved into the chip lead when busting Todd Terry A♥ J♣ > 3♥ 3♠, and then looked as if he was going to run away with the tournament after cracking Vinny Pahuja´s Aces with pocket Queens and then eliminating Harrison Gimbel just short of the money Q♣ 10♦ > A♦ K♠ to increase his stack to 1,774,000 chips.

Zinno is the Bubble Boy as Ganta Crashes

Thereafter the habitual shove-or-fold tactic was adopted by the short-stacked players – a period during which Siva Ganta´s stack was scythed down by players such as Richard Kirsch and Daniel Navarrette, while Matt Stout got himself among the chip leaders after busting out Sean Jazayeri earlier in the day.

Ganta will have to rebuild his stack when play resumes in the WPT Seminole Hard Rock Poker Showdown after being reduced to just 435,000 chips, while those who replaced him at the top of the leaderboard include: