Evans performed a Lazarus-like return to battle back from just over one big blind at one point on Day 3 to claim the UKIPT Dublin main event. 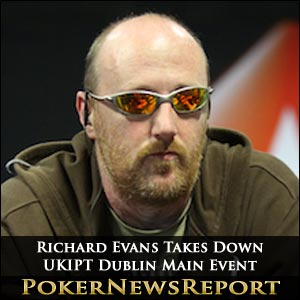 Welshman Richard Evans performed a Lazarus-like return to battle back from just over one big blind at one point on Day 3 to claim the United Kingdom and Ireland Poker Tour (UKIPT) Dublin €770 buy-in No-Limit Hold’em main event at the CityWest Hotel.

Evans – playing in just his second live tournament after picking up $3,048 for 65th in the UKIPT Nottingham main event at the start of last month – found himself in deep trouble on Sunday as he fought to stay in the tournament, but eventually clawed his way back to secure his place at the eight-handed final table in fourth in chips.

The Welsh wizard – who qualified through PokerStars for just €15 – ended up with $96,724 for his success after striking a three-player deal with England’s Stephen McGrath and Irishman Seamus Birt that ensured each of them left with $76,867.

That left $19,857 to play for – and it was 46-year-old Evans who emerged victorious when he defeated McGrath in their 30-minute heads-up encounter after the Welshman had eliminated Birt in third place to ensure that he began the head-to-head on five million chips against his opponent’s 3,580,000.

The dealer produced the 9♥ on the turn and 50-year-old McGrath shoved all-in for 1.35 million, to immediately be called by Evans.

McGrath showed 6♥ 2♥ for second pair, as well as a heart flush draw, while Evans’ 9♦ 3♣ gave him top pair and an open-ended straight draw to be the overwhelming favourite to take down the pot and the title.

And so it was, as the A♣ on the river changed nothing to ensure that the Welshman – who had been sporting a dazzling red T-shirt with ‘Welsh Boy’ emblazoned on the front – took down the third stop on season three of the UKIPT.

Clearly overcome by his victory, the online micro-stakes player – who is also a cashier at the famous Portmeirion village where British TV’s The Prisoner was shot – placed his hands over his mouth and headed for a fire exit, before seeing sense and heading towards the bar!

A short while later, Evans, from north Wales, could be heard shouting: ‘Yes! Yes!’ Then the Welshman emerged, more composed now, to have his photograph taken – with a whiskey in one hand and a pint of Guinness in the other. Quite right, too, as this victory will make certain of his plans to have his house refurbished and much of his mortgage paid off.

The only disappointment for organisers of the event will be that just 597 players signed up – down from last year’s 718 when Dutchman Joeri Zandvliet picked up $117,485 for his success – although that might have something to do with the increase in entry fee from €500 to €700.

Still, those players who did start this year’s event created a prize pool of $535,378, ensuring that American Shyam Markus collected $1,281 for finishing in 72nd place as the first starter to make the money.

Englishman Lee Atherton was the first player eliminated on the final day for $12,299 when his luck ran out on two successive hands.

The first saw Evans, in middle position, open for 43,000 and 39-year-old Atherton raise to 66,000. Evans then re-raised to 176,000 and Atherton called. The A♣ 7♣ K♦ flop resulted in Evans adding 240,000 to the pot and Atherton – letting out an audible groan – folded but revealed that he had queens. For his part, Evans informed his opponent that he had flopped trip kings.

Atherton – from Timperley near Manchester – wasn’t so fortunate on the next hand, however. Irishman Padraig O’Neill, in middle position, opened to 40,000 and Atherton – in the cut-off seat – called, as did big blind Seamus Birt.

O’Neill showed J♠ J♦ for the top set, while the luckless Atherton revealed 9♠ 9♣ to hold middle set. The nine of diamonds did not arrive on the turn or river, ensuring that Atherton secured his second successive deep run on the UKIPT after exiting in 15th place in Nottingham.

Keith Swain Out in Seventh

Seventh place and $16,142 went to another Englishman in Birmingham’s Keith Swain when his pocket three couldn’t beat Dutchman Vincent Buis’ pocket fives, while the final day’s initial chip leader, 43-year-old Graeme Crozier, exited in sixth place for $21,010 not long after.

Tax advisor Crozier was also unlucky as he played well throughout, but succumbed over two hands to McGrath – the first seeing his queens cracked by his fellow Englishman’s Big Slick when an ace arrived on the river, and the second completing his collapse when McGrath’s king kicker beat out his jack kicker with both players holding a pair of aces on the board.

Young Irishman O’Neill – who had held the chip lead for quite some time on the final day – remained aggressive throughout, but came unstuck against Evans to exit in fifth place for $26,519.

The Welshman limped in from the small blind and full-time player O’Neill checked to see an A♠ J♠ 3♥ flop. Evans then bet 80,000 and O’Neill raised that to 210,000, with the Welsh player making the call to see the 4♦ arrive on the turn. Evans checked, but O’Neill popped 460,000 into the pot – only for Evans to shove all-in.

O’Neill again made the call to show 6♠ 3♠ for bottom pair and a flush draw, while Evans revealed A♥ 8♠ for top pair. The 9♣ river ended the Irishman’s hopes, though, as he had required a spade, three or six to double-up.

Buis was next to hit the rail in fourth place for $34,334, although it did take over an hour from the previous elimination before the Dutchman was collecting his cash after being seen off by McGrath.

Under the gun, McGrath opened for 250,000, but Buis – who had tried almost everything as the short stack to stay alive, from limping to shoving – again moved all-in, this time for 965,000, and eventually got the all from his Liverpool opponent.

With Buis eliminated in fourth, the three surviving players agreed that previously mentioned deal, before 54-year-old Birt hit the rail in third place for $76,867.

Birt – who had seen his stack dwindle to just 1,015,000 – opened for 215,000 from the button. But Evans then shoved all-in, prompting McGrath to fold what he claimed was Big Slick. However, Birt was not scared off and called to show K♣ Q♣ to be up against the A♥ 5♠ of Evans.

The 3♣ 9♣ 2♦ flop gave Birt a flush draw, but the 9♦ turn and J♥ river couldn’t give him the cards he wanted, so ensuring that McGrath and Evans would play for the remaining cash.

McGrath, of course, would lose that heads-up battle, so was probably feeling rather sick as he could have the title had he stayed in the previous hand with a double elimination!

The fourth stop on this season’s UKIPT pulls into Newcastle’s Aspers Casino on the sixth of September for five days of action until the 10th.