Richard Bodis put in a completely focused and targeted performance to win the fourth leg of the Eureka Poker Tour in Croatia. 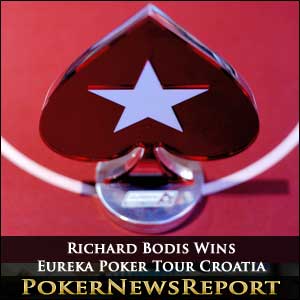 Richard Bodis put in a completely focused and targeted performance to win the fourth leg of the Eureka Poker Tour in Croatia.

Hungarian poker professional Richard Bodis topped a field of 255 satellite qualifiers and fellow professionals who paid the €800.00 buy-in, to collect the Eureka Trophy, €47,298 first prize and a seat in the Eureka Grand Final to be played in Prague in December (worth another €5,300).

In his first ever major live cash, Richard described the trophy as having more importance to him than the money – the win obviously meant everything to “Rich”.

The fact that ten different countries were represented by players who cashed in the poker tournament illustrates the truly remarkable appeal of the Eureka Poker Tour. Not only did the cream of the Eastern Europe poker fraternity get involved in the Main Event, but also some notable UK poker players – GUKPT regular Owen Shiels, Londoner Michael Leedham and Eureka Varna cashee Neil Rawnsley among them – and we were treated to a special appearance by WSOP/PokerStars ambassador Chris Moneymaker, who was the chip leader at one stage on Day 1A.

Of the 255 entrants, just 85 started on Day 2 – each chasing a place on the final table or, at worst, getting within 27 place bubble. It took until 10.00pm until the bubble eventually burst and, as the intention was to get down to the final table during the day, play did not finish until 2.30am – when eleven players were still in with a shout. Sadly none of the above mentioned UK poker players made the cash, but neither did Mr Moneymaker such was the quality of the play at the event. One player who did manage to squeeze in was Greek poker player Pontos Paniteleimon.

The Tale of Pontos Paniteleimon

Pontos had managed to get paid off on quad eights earlier in the day and couldn´t believe his luck to hit quad nines in a later hand. Sadly, he chose to check through the final round of betting and never really took advantage of the situation. It was a decision he came to regret when still lying fifth in the event and being dealt pocket aces. Seeing an opportunity to double up against compatriot and chip leader Vasileios Chantzaras, Ponto got into a pre-flop raising race until he was all-in and showed his hand.  Chantzaras had been dealt KK, and although the flop of 7♠ 6♠ 2♣ kept Pontos in the lead, the K♦ on the river ruined his day and gave Chantzaras a massive chip lead as the final table approached.

Chantzaras wasted no time taking control of the final day, eliminating Vasileios Chantzaras in eleventh with Q♣ Q♠ versus Chantzaras´ J♥ J♣, Matej Marinovic in seventh in a A♠ Q♠ versus A♦ 10♥ race, and Michael Lundquist in fifth, in an astonishing hand which qualifies for Hand of the Day.

The great call signalled the beginning of the end for Chantzaras. The very next hand he called Richard Bodis (8♠ 6♣) with a pair of threes on a board which ran 7♣ 5♠ A♥ / 4♣ / 2♣ – Bodis finding the better straight – and soon after was the short-stack of the four remaining players when folding a 172,000 chip three-bet to Spaniard Jose Carlos Fibla Lopez´s shove. Lopez was actually the next to go shoving his pocket fours into Richard Bodis´ pocket tens, but the Greek did not stick around for much longer – running his A♥ 2♦ into Carsten Luxig´s A♦ J♦.

Bodis´ two big pots against Chantzaras had sky-rocketed him into a major chip lead, and it did not take very much time for him to use that advantage to win the tournament – just 10 minutes. Carsten Luxig raised Chantzaras from the big blind and the flop of 10♠ K♣ 2♦ was checked by both players. Luxig bet 130,000 chips on the 5♠ turn, which Bodis raised to 300,000. Luxig instantly called all-in and after a long contemplation Bodis called. Luxig showed 6♥ 5♣ for third pair, which Richard Bodis revealed he had Q♥ 10♥ for second pair and the lead. The 7♠ on the river provided no help to the German, and Richard Bodis was the new Eureka Croatia champion.