Rhys “floppinhel” Jones took time out from his phenomenal online poker success to take down Leg 2 of the Grosvenor UK Poker Tour in Manchester at the weekend. 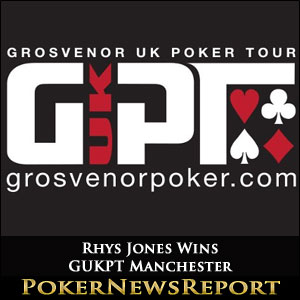 Rhys “floppinhel” Jones took time out from his phenomenal online poker success to take down Leg 2 of the Grosvenor UK Poker Tour in Manchester at the weekend.

The G Casino in Manchester was the host for the second leg of the Grosvenor UK Poker Tour this weekend and after two opening flights on Thursday and Friday, and nine levels of play on Saturday´s Day 2, nine players returned on Sunday to contest the final table. At the head of the chip counts was Simon Deadman – but he had to overcome a tough final table if he was to break his sequence of finishing second in major tournaments this year after being the runner-up in Genting Poker Series Main Events at Nottingham and Birmingham, with a second-place finish in the FPS Deauville High Rollers sandwiched in-between.

When play resumed at the G Casino in Manchester, the blinds were 4,000/8,000 with a 1,000 chip ante and the early exchanges were very subdued. Mark Harding was exceptionally unfortunate to be eliminated during the first level of play when his A♥ 10♦ was up against the A♠ 9♣ of Nathan Jackson, and Jackson spiked the 9♥ on the River to bust Harding in ninth place, but Graeme Crozier made the mistake of taking on Steve Warburton´s 8♦ 8♠ with A♥ K♠, and missed the board to be eliminated in eighth place. Rhys Jones moved into pole position when forcing Simon Deadman out of a 300,000 chip pot with some post-flop aggression, but Deadman doubled-back almost immediately when his 10♣ 9♣ flopped trip Nines. However, Jones extended his chip advantage just before the dinner break when his A♦ 6♣ paired the Ace on the flop to best Karl Mahrenholz K♥ J♣ (the King had also paired on the flop) and, as the six remaining players returned from the dinner break, had a big advantage over the rest of the field with blinds increasing to 10,000/20,000 with a 2,000 chip ante.

Deadman and Warburton Close in on Jones

Three quick eliminations after the dinner break saw the chip stacks at the top of the leaderboard virtually identical. Steve Warburton chipped up nicely when his 2♣ 2♠ was good enough to eliminate Dahe Liu (A♠ 5♣) in sixth place, before – almost immediately – Nathan Jackson was sent to the rail in fifth place when his paired A♦ Q♣ came second to Rhys Jones´ set of Sixes. Simon Deadman took a narrow chip lead when turning a heart flush with Q♥ 10♥ against Rhys Jones´ flopped two pairs (K♣ 3♠), and then Steve Warburton moved up alongside Deadman and Jones at the top of the chip counts when busting Richard Kellett in fourth 10♥ 10♠ > 5♥ 5♦. At this point, the three players agreed a deal that would see each lock up £39,000, with £4,000 (£3,000 for first and £1,000 for second) and the title to play for.

Jones Leads into Heads-Up, but Deadman not Going Quietly

Following the conclusion of the deal negotiations, Steve Warburton had the misfortune to miss an open-ended straight draw against Simon Deadman and then lost another stack of chips to Rhys Jones. He got the last of his chips in with 6♥ 6♠, but Rhys Jones´ A♥ J♠ paired the Ace on the flop and Warburton left the GukPT Manchester final table in third place. Despite taking a 2.1 million -v- 1.7 million chip advantage into the heads-up, Rhys Jones was quickly put under intense pressure by Simon Deadman – who opened up a 2:1 chip lead when forcing Jones out of a 800,000 chip pot. Jones doubled-up when rivering Trip Sevens against Deadman´s flopped top pair, but Deadman returned the favour when his pocket Nines rivered Trips to leave the respective chip stacks at Jones 2.5 million – Deadman 1.3 million.

As the blinds increased to 40,000/80,000, it was Jones´ turn to apply the pressure, and he quickly reduced Simon Deadman to 440,000 chips by repeatedly moving all-in and forcing folds from his opponent. Eventually Deadman lost the last of his chips when calling another shove from Rhys Jones: Jones: J♥ 9♦ Deadman: K♦ 2♦ The flop of 10♠ 9♥ A♥ gave Jones a bottom pair, and his hand improved to a Queen-high straight following the Turn (8♣) and River (Q♦) – and it was all over. Rhys Jones had beaten Simon Deadman, who was – for the fourth time this year – runner-up in a major Main Event.

The £1,100 buy-in GUKPT Manchester Main Event survived a Day 1A scare and eventually attracted 192 players for the £200,000 guaranteed tournament – meaning that a £8,000 overlay was shared among the twenty players who cashed in the event. Those who made it to the final table went home with the following amounts: