Rhode Island has moved slowly on the idea of expanding its gambling offerings to include the Internet, but may be prompted by neighboring states to move faster. 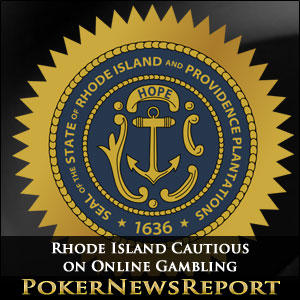 Rhode Island has moved slowly on the idea of expanding its gambling offerings to include the Internet, but may be prompted by neighboring states to move faster.

Currently anticipating its land-based casino revenue in fiscal 2014 to reach roughly $330 million, Rhode Island is expecting that number to be cut by almost 25% once the neighboring state of Massachusetts completes its brick and mortar casino expansion. The Bay State is on track to open three casinos and one slots parlor by 2016 that will undoubtedly siphon a good number of customers who currently patronize the Twin River and Newport Grand casinos in Rhode Island.

That may force Rhode Island state officials to take a closer look at online poker and gambling to recoup some of those losses. Those officials have studied the possibility of adding online gambling action to the mix, but progress has not advanced beyond the stage of exploration for a number of reasons.

The main reason, similar to a number of other states that have been hesitant in taking the plunge into online gambling regulation, is the fear that Internet gambling would cannibalize the current profits seen from land-based gaming operations. That includes an expected decrease in lottery sales should online gambling be made available to Rhode Islanders.

According to Rhode Island Lottery Director Gerald S. Aubin, a number of small retail outlets and convenience stores are extremely dependent upon the proceeds from lottery sales. And with the population of Rhode Island at only slightly more than one million, Aubin is concerned that offering a full slate of online casino games “wouldn’t generate enough money,” he told the Providence Journal.

On the other hand, should Rhode Island consider restricting its online offerings to poker, Aubin believes that a “substantial” amount of revenue could be generated. Such an endeavor would not be problem-free, however, and would require the approval of voters statewide.

Currently, Rhode Island is highly dependent on funds obtained from gambling, as casino and lottery revenue comes in third among the state’s greatest sources of funds. That stream of cash will take a severe hit in 2016 when Massachusetts has its new casinos up and running.

For now, Rhode Island officials seem content with the status quo. But the gambling revenue situation will look entirely different in two short years. Chances are that state legislators will study online gambling possibilities with greater intensity in the future.