Marvin Rettenmaier is in great position to bag the $1,196,858 prize for taking down the WPT World Championship, taking a massive chip lead into the final table. 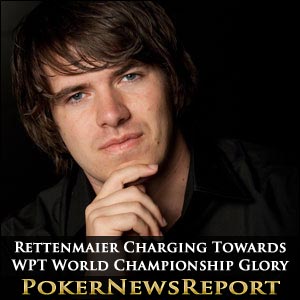 Germany’s Marvin Rettenmaier is in a great position to bag the $1,196,858 top prize for taking down the $25,500 buy-in No-Limit Hold’em World Poker Tour (WPT) World Championship at The Bellagio in Las Vegas after taking a massive chip lead into the six-handed final table.

Team PartyPoker Pro Rettenmaier – who holds 6,715,000 chips, or almost 112 big blinds, against nearest rival Michael ‘The Grinder’ Mizrachi’s 2,560,000 – will have to wait until tomorrow, however, before he can push for glory as the $100,000 buy-in Super High Roller event will today play out to a conclusion.

Still, Hollywood’s Mizachi will present a huge hurdle as he aims to collect a his third WPT success, while Vegas-based Steve O’Dwyer (third on 2,035,000) – in his third WPT final table – and two-time WPT winner Nick Schulman (fourth on 1,555,000), of Manhattan, are still more than capable of springing an upset tomorrow.

Only three players had to be eliminated on Day 6, ensuring that just over 150 minutes of play was required before Hafiz Khan – the Day 4 chip leader – and fellow Californians Moon Kim and Wil Wilkinson hit the rail to stop play for the day.

Hafiz Khan Out in Ninth Place

Under the gun, Rettenmaier opened by raising to 105,000. Play folded to small blind Mizrachi, who called, while big blind Khan took the decision to re-raise to 360,000. Rettenmaier took his time but eventually re-raised to 670,000, prompting Mizrachi to fold.

However, Khan had other ideas and moved all-in for about 1,500,000, with Rettenmaier quickly calling to show J♦ J♥. Khan revealed A♥ K♣ and was facing a coinflip for his event life.

The 9♦ 8♥ 7♥ flop ensured that Rettenmaier stayed ahead, while the 3♥ turn changed little, although it did give Khan some additional outs to a heart flush draw. However, the 6♦ was not the red card he required and Khan was gone – but for his biggest prize this year – as the German moved up to 5,780,000.

Eleven hands later, we were down to seven players as Wilkinson exited in eighth place for $82,361 after losing out to Mizrachi.

In middle position, Wilkinson raised all-in for 650,000 and Mizrachi – in the cut-off seat – called as everyone else got out of the way. Wilkinson showed A♣ 6♣ to be behind the Q♠ Q♦ of Mizrachi.

It was pretty well over after the K♦ Q♣ 3♦ flop gave Mizrachi trip queens, leaving Wilkinson needing running straight cards or running clubs to double-up. However, the 6♥ turn and 3♣ river were no good, meaning just one more player had to be knocked out before the official – and televised – final table would be set.

Joe Serock is the WPT Player of the Year

Kim – the WPT Bay 101 Shooting Stars champ – was the final elimination of the day in seventh place for $118,966 when he lost out to Rettenmaier only 31 hands later. More significant, though, is the fact that Albuquerque’s Joe Serock – who took third in the Bay 101 event for $320,400, as well as third again for $306,240 in the WPT Seminole Hard Rock Showdown and 10th here for $47,587 – is now the official WPT Player of the Year as Kim needed to finish third or better to take the title from his rival’s grasp.

The J♥ 7♦ 3♥ changed nothing, while the 4♣ turn and 6♦ river completed the Day 6 play as Kim was eliminated as the final table bubble boy as Rettenmaier piled up 6,715,000 chips to hold an enormous lead heading into tomorrow’s last day.