The U.S. Republican party released its political platform for the upcoming November election and included a section devoted to prohibiting online gambling. 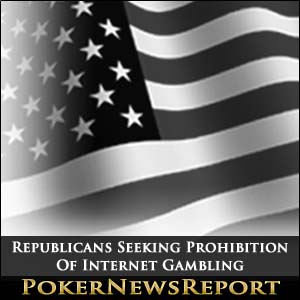 The U.S. Republican party released its political platform for the upcoming November election and included a section devoted to prohibiting online gambling.

In a segment entitled Renewing American Values, the Grand Old Party (GOP) is attempting to revoke the recent progress made in online gambling when the U.S. Department of Justice (DoJ) ruled that the 1961 Wire Act applies only to sports betting. The GOP’s platform states that Millions of Americans suffer from problem or pathological gambling that can destroy families. We support the prohibition of gambling over the Internet and call for the reversal of the Justice Department’s decision distorting the formerly accepted meaning of the Wire Act that could open the door to Internet betting.

That DoJ ruling occurred last December and has prompted a number of states to consider online gambling legislation with two states already having enacted online gambling laws. Nevada is in the forefront with poker-only legislation and is on pace to have at least one online poker site up and running perhaps by October. Delaware has also approved Internet gambling and will likely roll out its intrastate offerings next year.

Pro-Internet gambling forces were a bit taken aback by the GOP’s attack on online gambling, with Poker Players Alliance VP of Player Relations Rich Muny stating that for every two steps forward, we do have the occasional step back. The two steps forward are the Wire Act reversal and a federal judge’s recent decision finding that poker is predominantly a game of skill and not merely a game of chance as are other modes of casino gambling.

With recent talk of Senators Harry Reid (D-NV) and Jon Kyl (R-AZ) drafting legislation believed to be online poker-only, the GOP directive calling for wiping out Internet gambling altogether does not bode well for the passage of any legislation at the federal level. What’s further disturbing is the fact that the Republican platform seemingly equates Internet gambling as a social evil on par with pornography and sexual predators by stating, We call on service providers to exercise due care to ensure that the Internet cannot become a safe haven for predators.

The PPA is still pushing for approval of HR 2366, entitled, the Internet Gambling Prohibition, Poker Consumer Protection, and Strengthening UIGEA Act, which was introduced by Rep. Joe Barton (R-TX) over a year ago and has not been making much progress. The PPA still holds out hope that Congress will enact the legislation despite the recent political statement made by the Republican platform.

It is unfortunate that the authors of the plank are at odds with many House Republicans who are leading the charge for licensed and regulated online poker, but it is even worse that they are so out of touch with the actual voters, Muny said.