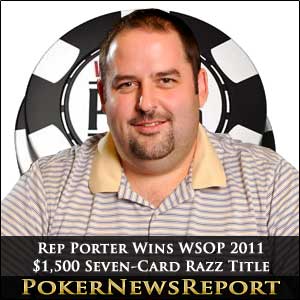 Like so many tournaments at the Rio All-Suite Hotel & Casino, event #44 took four days to complete as Washington State’s Porter – whose real name is Ralph – saw off 362 other competitors to add this title to the $1,500 Six-Handed No-Limit Hold’em crown he secured back in 2008.

With this victory, Porter has now recorded two WSOP victories, five final-table appearances and 16 cash finishes to have $961,600 in series earnings, although the first will always be “the most special” to him.

As day three ended after 10 levels, we were left with 31-year-old Texan Stephen Su – an accountant – and 40-year-old poker pro and financier Porter to finish off their heads-up battle on day four.

Having been a full-time pro for four years now, Porter started the final day behind, but quickly overcame that deficit by winning the first hand when making a nine-low to beat Su’s queen-low.

Su still managed to win many small pots, although it was Porter who collected the bulk of big ones to leave his opponent well down on numerous occasions.

Su, who now has seven WSOP cashes, had attempted to double-up once before when getting all his chips in the middle, only for Porter to lay down his hand in anticipation of a better spot to make his big play.

Still, Porter – who “did not play much poker in 2009 or 2010” after starting a business – wasn’t overly confident when he did make his move when Su went all-in on third street while holding 3-2/A.

Porter had 6-9/8, but things weren’t looking good for him when Su found a 4 on fourth and the eventual winner paired with an 8.

Su then got a 10 on fifth street to hold a 10-low, while Porter caught a 2 to find some outs – but only if Su failed to make a better low. Sixth street made no difference, but seventh gave Porter a 4 to find the lead with a 9-low for victory.

However, Porter reckons that his first gold bracelet win three years ago “means more” to him as he had “just gotten back into poker from working on Wall Street” for six years.

The newly-crowned champion said that he played a lot of poker tournaments in 04, 05, 06 and 07 with “two seconds and two fourths, plus a lot of top-20 finishes, but had never won anything”.

Therefore, he really “wanted to win the gold bracelet so bad, and I fulfilled that…so the first one is always the most special”.