The Reid-Kyl proposal to regulate online poker that may be introduced in Congress prior to year’s end may violate the U.S. Constitution, says a legal expert. 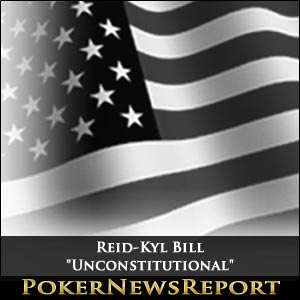 The Reid-Kyl proposal to regulate online poker that may be introduced in Congress prior to year’s end may violate the U.S. Constitution, says a legal expert.

Former U.S. solicitor general Paul Clement analyzed the bill at the behest of the Poker Players Alliance (PPA) and found some serious due process concerns. Clement’s memorandum stated that the provision which seeks to punish online poker sites that operated in the U.S. following passage of the Unlawful Internet Gambling Enforcement Act (UIGEA) in 2006 by forbidding them from applying for a license for five years could be construed as an unconstitutional bill of attainder as it seemingly penalizes a particular group without providing protections of their rights, the Las Vegas Review-Journal reported..

Clement is an expert in constitutional law who represented the government under the Bush administration from June of 2005 until June of 2008, arguing more than 60 Supreme Court cases during that time. He is now in private law practice. Clement informed both Kyl and Reid of his findings late last month, but neither Senator has commented publicly. A Reid spokesperson did say that the bill is still being worked on prior to a possible introduction in the lame-duck session.

The bad actor provision is aimed at PokerStars and Full Tilt, who continued operating in the U.S. after the UIGEA was passed, while other poker rooms such as Party Poker chose to adhere to the new law and exit the marketplace. Party Poker was the world’s top online site in player traffic prior to pulling out. PokerStars and Full Tilt achieved the first and second rankings, respectively, by flouting the law and continuing to service Americans. They continue to hold down the top two spots today.

The American Gaming Association (AGA) has gone on record as supporting the five-year ban of the Reid-Kyl bill. A key strength of this draft legislation is its focus on eliminating illegal Internet gambling and penalizing those who violate U.S. law, AGA President Frank Fahrenkopf said in a statement. The draft clarifies and restores federal laws, giving law enforcement communities the tools necessary to prosecute illegal online gambling operators and keep them out of the U.S. market once and for all.

The PPA recently sent Reid and Kyl a letter detailing six changes that they would like to see to the proposal, one of which was the bad actor provision. PPA Chairman Alfonse D’Amato called the five-year penalty arbitrary, unduly unfair and possibly unconstitutional.

It is beginning to look as though the Reid-Kyl bill stands no chance of passing during this Congressional session. The proposal faces opposition from a number of fronts and may not even be introduced in 2012. Reid recently told the National Journal that he is still looking for a way to move his bill through the Senate.

We don’t have a path forward right now, but we’re working on it, he said.