Regulators Issue More Licenses to Ease the Pain in Spain

Spain´s online gaming regulators have announced they will issue more licenses next month in an attempt to reverse the declining fortunes of the industry. 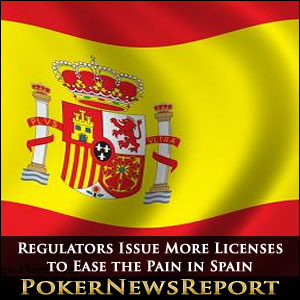 Spain´s online gaming regulators have announced they will issue more licenses next month in an attempt to reverse the declining fortunes of the industry.

The announcement by the Dirección General de Ordenación del Juego (DGOJ) follows the release of figures which show a year-on-year 6 percent decline in Gross Gaming Revenues on dot.es sites. The licenses will be available to existing operators who wish to expand into other avenues of online gaming and to companies who wish to enter (or re-enter) the Spanish market.

The regulators hope that, by allowing existing operators to expand into other avenues of online gambling, players will increase their online spend and generate more income for the operators. Already PokerStars has added a casino to its poker client and, with the new licenses available, the world´s largest online poker site could conceivably venture into slots, bingo and sports betting.

Whether the issuing of new licenses has any effect on the fortunes of the online gaming industry in Spain is doubtful. The industry is burdened by red tape and high taxes, and companies such as Ladbrokes and Bet365 have already relinquished some of the licenses they were awarded in 2011. In June 2013 the Amaya-owned Ongame network pulled out of Spain completely.

More regulations were introduced in May this year to identify players who had won amounts in excess of €2,500 or who were making frequent withdrawals from their accounts. The Spanish tax office (El Ministerio de Hacienda y Administraciones Publicas) also ruled that online gambling operators transacting in Bitcoin had to apply for an online gambling license, and would be subject to the same 25 percent tax on Gross Gaming Revenues (the highest rate in Europe) that is applied to operators offering games in €uros.

The high tax burden on online gaming operators has been reflected in the lower value of rewards and promotions offered to online poker players in Spain – many of whom are voting with their feet and choosing to play outside the regulated market on offshore sites. Research conducted by the Universidad Carlos III in Madrid concluded that almost half of Spain´s online poker players play on “offshore sites”, while some of the most successful Spanish players have relocated to other countries to avoid paying 20 percent income tax on their gross winnings.

Due to the high rate of taxation, the lower value of rewards and a lack of action (even on PokerStars – where there are rarely games of Zoom Poker running beyond €0.05/€0.10 outside of peak periods), it is not surprising that players are looking outside of the regulated market for their entertainment. Unfortunately for the Spanish regulators, the sites that players are choosing to use as an alternative to those in their domestic market already have casino, slots and sports betting options. Issuing more online gambling licenses in Spain would therefore not appear to be the answer!

Online gaming companies can apply for the new licenses from 1st November subject to the approval of the regulator´s plans by El Ministerio de Hacienda y Administraciones Publicas.