Regulation of Online Poker in Russia Takes a Step Forward

While the USA dithers with the regulation of online poker, the Russian Federation is considering proposals that could be in place as early as next year. 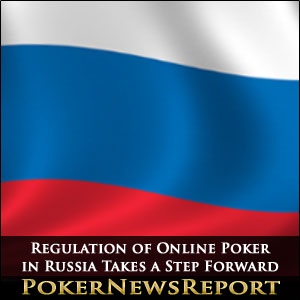 While the USA dithers with the regulation of online poker, the Russian Federation is considering proposals that could be in place as early as next year.

Online poker has been technically illegal in Russia since the Sports Ministry removed poker from the national sports registry in June 2009. By default poker was classified as a form of gambling, and over the next five years the Russian authorities periodically ordered Internet Service Providers to block access to online gambling websites such as PokerStars, Unibet and PartyPoker.

More recently the Russian authority´s approach to illegal gambling appears to have softened and – according to a report in the Russian online poker magazine Pokeroff – proposals for the regulation for online poker in Russia are being seriously considered by the Russian Finance Ministry – with the possibility that they could become law as early as next spring.

The Russians Waste No Time in Drafting Proposals

The first steps towards regulating online poker in Russia became apparent in June, when the president of the Russian Poker Union – Kakha Kakhiani – told the financial newspaper Kommersant that the government were looking into the possibility of regulating online poker to fill a 5 billion roubles ($146 million) gap in the federal budget.

The following month, First Deputy Prime Minister Igor Shuvalov instructed the Finance, Economic Development and Justice Ministries to produce a report into the feasibility of regulation. The report was produced within three weeks (can you imagine that happening in the States!) with the conclusion that online poker in Russia would generate between 2 and 3 billion roubles ($58 million to $87 million) in its first year – rising to 5 billion roubles within three to four years.

Could Poker be Re-Classified as an Intellectual Game?

Speaking to Pokeroff about the proposed amendments to the law that would (legally) allow online poker in Russia, Vladimir Bauer – chief researcher at the Centre for Tax Policy Research Institute of the Ministry of Finance – gave the opinion that online poker should fall into the category of an “intellectual and commercial game” in order that it could be isolated from online games of chance and taxed as an “electronic service”.

The re-classification was supported by Dmitry Lesnoy – the Russian Executive Board member of the International Poker Federation. Mr Lesnoy had previously argued against restricting the availability of online poker to the four areas in which gambling in Russia is legally allowed (Azov-City, Primorye, Siberian Coin, Amber), commenting that not making online poker freely available in Russia would result in a situation similar to the USA – where the government fails to collect tax revenue due to legislation (or a lack of legislation) which forces players to use offshore poker sites.

The Proposals for Taxation are Not That Bad

The proposed amendments to the law include age and address verification, measures to identify and prevent problem gambling and a straightforward taxation system that would see licensed online poker operators paying 20% tax on their gross gaming revenues and poker players being charged 13% tax on any withdrawals they made from their accounts.

The rates of taxation compare favourably with jurisdictions in Europe that have already implemented regulated online poker and – according to the Pokeroff news item – PokerStars has indicated that it is satisfied with the proposals and is interested in legally entering the Russian market. It seems that the Russian authorities are not going to introduce a bad actor clause into their online poker bill and – as a result – potentially benefit from half a billion in tax dollars over the next five years.

Why didn´t the Americans think of that?